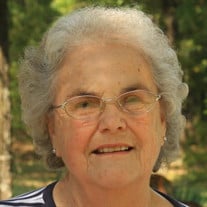 Willie Ann Tucker, 88, of Perryville, Arkansas passed away July 4, 2021 in Perryville, Arkansas. She was born in Plainview, Arkansas to William and Annie Hatley on October 1, 1932. She was married to J.B. Tucker, Jr. on April 2, 1948 and together they raised seven children. She was previously employed with the U.S. Forest Service located in Perryville. She enjoyed growing flowers and fresh vegetables in her garden. It was said that she had a “green thumb” because her gardens flourished and were beautiful. She was the best cook and baker and it was known by family and friends that she made the absolute best homemade biscuits anyone has ever tasted. She is survived by her seven children, Sharon Grimes (George) of Houston, Deborah Weaver (Anthony) of Perryville, Gary Paul Tucker of Perryville, Karen Billing (Gary) of Vilonia, Cindy Crews of Conway, Janelle Milloway (Joe) of Redfield, and Kim McNeal (Chuck) of Houston. She is also survived by her ten grandchildren; eighteen great grandchildren; and a host of friends and relatives. She was preceded in death by her husband, her parents, one brother, William “Dub” Hatley; three sisters, Ruby Young, Joyce Brower, and Peggy Williams; and daughter in law, Rebecca Diane Tucker. Visitation for the family will be from 1:00 to 2:00 p.m. Thursday, July 8, at the Harris Funeral Home, 1325 Oak Street, Morrilton, Arkansas. Funeral services will be 2:00 p.m. Thursday, July 8, at Harris Funeral Home following the visitation with Bro. Dennis Lacook officiating. Burial will follow at Hope Cemetery in Perryville, Arkansas. Pallbearers will be Gary Lynn Tucker, Travis Weaver, Tucker Carden, Tyler Givens, Chuck Tillman, and Aaron Givens. Honorary pallbearers are Tony Weaver and Steve Keener.

The family of Willie Ann Tucker created this Life Tributes page to make it easy to share your memories.

Send flowers to the Tucker family.