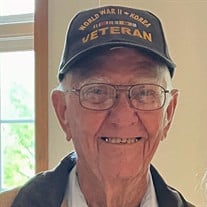 Sherman Jackson Williams, known to most as Pa Buck, of Highfill, Arkansas, passed away at the age of 93 on August 12, 2021, after a brief illness. Sherman was born on October 1, 1927, to Thomas and Rose (Brents) Williams in Van Buren County. On May 15, 1949, he wed Opal Berniece Cleaver, and they had two daughters, Millie Michelle and Dorinda Delaine. Sherman was a Christian and lifelong Baptist. He was preceded in death by his parents; two brothers, Brownie Williams and Lowell Williams; two sisters, Sally Durham and Anna Ruth Wells; and his wife of 63 years, Berniece Williams. He is survived by two daughters, Michelle (and Dean) Watson of Harrison, and Dorinda (and Billy) Smith of Highfill. He leaves behind six grandchildren and four great grandchildren, Clay Sherman Wallis and daughter Paisley of Omaha, Arkansas; Becca (and Colin) Jackson and son Canaan of Harrison; Sara Wood and son Owen Sherman of Springdale; Josh Wallis and daughter Kayden of Fordland, Missouri; Zachary Anzaroot (and Kiki Smith) and son Zakai (to be born in October 2021) of St. Augustine, Florida; and Seth Smith (and Taylor Piesco) of St. Augustine, Florida. Other survivors include his six sisters, Virgie Sommers of Morrilton; Shirley Massingill of Hattieville; Barbara Stracner of Morrilton; Tommie Williams of Morrilton; Johnnie Williams of Morrilton; and Linda Campbell of Cleveland. He also leaves numerous nieces and nephews and a host of lifelong friends. Sherman was a 32° Scottish Rite Mason and member of the Morrilton Lodge for over 50 years. He served in the Army during World War II and in the Air Force during the Korean War. He retired as a long-distance truck driver for ETMF and ABF. After retirement, he worked 10 years as a security guard for Plough Manufacturing in Memphis, TN. He loved attending patriotic events, living in the country, riding his motorcycle, eating ice cream, fishing, woodworking, and camping and traveling with his two daughters and their husbands. Visitation and funeral services will be held at the Harris Funeral Home in Morrilton, Arkansas. Visitation will be on Thursday, August 19, 6:00-8:00 p.m. Funeral services will be held Friday, August 20, at 10:00 a.m. with burial at Brents Cemetery in Cleveland, Arkansas. Pallbearers will be Clay Wallis, Josh Wallis, Colin Jackson, Zachary Anzaroot, Seth Smith, Dean Watson, and Billy Smith.

Sherman Jackson Williams, known to most as Pa Buck, of Highfill, Arkansas, passed away at the age of 93 on August 12, 2021, after a brief illness. Sherman was born on October 1, 1927, to Thomas and Rose (Brents) Williams in Van Buren County.... View Obituary & Service Information

The family of Sherman Jackson Williams created this Life Tributes page to make it easy to share your memories.

Sherman Jackson Williams, known to most as Pa Buck, of Highfill,...

Send flowers to the Williams family.