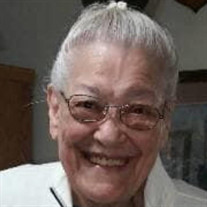 Ruth Gertrude Scott, age 86, of Perryville, Arkansas, passed away, Saturday, April 4, 2020. She was born in Paris, Arkansas in a little area called Greasy Valley; she always hated having to say Greasy Valley. At approximately two years old the family moved to Oregon. She was raised in Oregon and California. Ruth loved going to her grandma’s house at Coleman Creek Road because her grandmother would always make sugar cookies with her. Her dad had an old car they would drive up past Crater Lake and her and her sister Esther would fight over who had to sit on the driver’s side because they were so scared of the edge of the cliff. Around the age of fourteen her family moved back to Cherry Hill, Arkansas, where she met the love of her life who she married when she was fifteen years old. A few years later with two kids they moved to Winslow, Arizona. While in Arizona they had a son and moved around to different locations there. While her husband was out working she learned how to play guitar and crochet. They eventually moved back to Arkansas and settled back at Cherry Hill. She was a member of the Cherry Hill Freewill Baptist Church. Then they moved to Houston, Arkansas and her husband became the Pastor of Sweet Home Baptist Church. She was always in church and every church she was at she ran the nursery and children church programs. She would hand make the costumes for the kids to be in the Christmas and Easter plays that she put together each year. She worked as a secretary of the church. She always played guitar and loved singing at church with her family. She could play many musical instruments. She was a great mother and a wonderful grandmother who always enjoyed have her kids and grandkids with her. Ruth loved to play games and read books, write poetry and keep journals. In the last years of her life she suffered with Vascular Dementia, but she never forgot her husband Cleo, her mama or her daughter Loretta or how to love babies. She is greatly loved and will be dearly missed. Survivors include three children, Loretta Jones of Perryville; Monty (Betty) Scott of Houston, and Kenny (Caron) Scott of Perryville; eighteen grandkids; forty great grandkids, and thirteen great great grandkids. She was preceded in death by her husband of fifty seven years, Cleo Monty Scott; parents, Amos Bench, Sr. and Gaither Taylor Bench; sisters, Esther Schafer, Glenda Osburn, Donna Pruitt, Gaitha “Tootsie” Rush and brother, Amos Lloyd Bench, Jr; son in law, William E. Jones III, grandson, Timothy Jones and great grandson, Conner Scott. The family will be having a graveside service at a later date.

The family of Ruth Gertrude Scott created this Life Tributes page to make it easy to share your memories.

Send flowers to the Scott family.