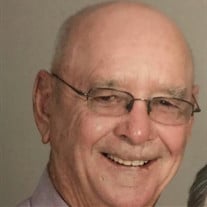 Ronnie Charles Magie, age 78 of Perryville, went to be with the Lord on Friday, October 15, 2021. He was born in Bigelow, Arkansas on October 26, 1942 to the late Ralph “Spot” Magie and the late Helen Stout Magie. Ronnie married his high school sweetheart and love of his life, Frances Ann Magie, in 1963, and they were blessed with three children throughout their marriage: Jeffrey, Jennifer, and Sallye. He worked hard as a lineman with First Electric Cooperative and retired from there after 36 years. He also faithfully served as a deacon at Temple Missionary Baptist Church for many years. Ronnie was a trustworthy, loyal friend to many. He was an athlete in his younger days and remained an avid sports fan throughout his life. He enjoyed watching the Arkansas Razorbacks, St. Louis Cardinals, but his favorite was watching his children and grandchildren play sports. Fishing and hunting were special pastimes for Ronnie, and he was the envy of his family in the fall of 2017 when he snagged the buck of his life! He was the best husband, father, and Pawpaw! No matter the event or occasion whether big or small, his grandchildren always knew PawPaw would be there! Even as his health began to fail, his loyalty and love to be there for his family did not. He will forever be remembered in our hearts for his love for food, Christmas, western movies, and Frances Ann, but most importantly he will be remembered for his Christian example of faith, love, and contentment throughout all of life’s circumstances. The world was a brighter place with him in it, and he will be missed greatly by his friends and family! Ronnie is survived by his wife of 58 years, Frances McDonough Magie; son Jeff (Ellen) Magie; son-in-law Patrick Melton; brother Jerry Magie; sister-in-laws Juanita Butler and Inna McDonough; five grandchildren- Magen (Jason) Lankford, Natalie Magie, Jeb Melton, Cole Melton, and Kantin Melton; and two great-grandchildren-Abigail and Titus Lankford. Ronnie is preceded in death by his two beautiful daughters Jennifer Melton and Sallye Ann Magie, his parents “Spot” and Helen Magie, and his brother, James Magie. Services for Ronnie will be on Tuesday, October 19, 2021 at 11 a.m. at Temple Missionary Baptist Church in Perryville, Arkansas. The family will receive guests for visitation one hour prior to the service beginning at 10 a.m. Burial will immediately follow at Volman Cemetery in Bigelow, Arkansas by Harris Funeral Home of Morrilton. The service will be officiated by Brother Gordon Morgan. Pallbearers for the service are Terry Hood, Brett Johnson, Bartt Johnson, Bob Johnson, Bill Lamb, and Farrell Moore. “I have told you these things, so that in me you may have peace. In this world, you will have trouble. But take heart! I have overcome the world” John 16:33

The family of Ronnie Charles Magie created this Life Tributes page to make it easy to share your memories.

Ronnie Charles Magie, age 78 of Perryville, went to be with the...

Send flowers to the Magie family.