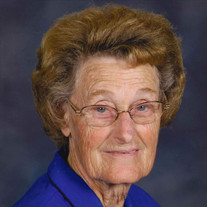 Reba Mae Turner, age 86, of Morrilton, Arkansas was born in Hattieville Arkansas, May 19, 1932 and died peacefully at Arkansas Hospice House Sunday March 17, 2019 after a long battle with Alzheimer’s. She was the daughter of Jim and Arkie Bizzell Looney. She is survived by her husband of 66 years, Roy Paul Turner; daughters, Cindy (Steve) Coffman and Pam (Don) Goodson; four grandchildren, Lindsey Barber, Tyler Goodson, Emily Holthoff, Katie Millsap; four great-grandchildren; one sister, Shirley (Dale) McGee; and brother, George (Ruth Ann) Looney. “Mrs. Turner”, as she was known in the community, was a long time private Kindergarten and Preschool teacher. She began her career as a public school teacher in various places such as Perry, Blackwell, Deer, Lord’s Schoolhouse and Kennett MO among other places. Some of these schools were one-room schoolhouses in which Mrs. Turner taught up to six grades at one time. In 1960 Mrs. Turner started her private “Turners Learning Center”. Her first class had 8 pupils. She retired having taught over 2200 students. She taught a total of 58 years. She was a member of Morrilton First Assembly of God church for 68 years. She loved to work in her flower and vegetable gardens. She took great pride in her yard. She loved her girls and grandchildren and was a Christian example for all of them. She was an excellent cook and seamstress devoting her time as a wife and mother. She was preceded in death by her parents and brothers, William T. Looney, Leamon Looney and James Looney. Funeral services will be 10:00 a.m. Tuesday, March 19, 2019 at Morrilton First Assembly of God with Rev. Ronnie Morris and Rev. Mike Norberg officiating. Burial will be at Elmwood Cemetery. Family will receive friends 5:00-7:00 p.m. Monday, March 18, at the funeral home.

Reba Mae Turner, age 86, of Morrilton, Arkansas was born in Hattieville Arkansas, May 19, 1932 and died peacefully at Arkansas Hospice House Sunday March 17, 2019 after a long battle with Alzheimer&#8217;s. She was the daughter of Jim and Arkie... View Obituary & Service Information

The family of Reba Mae Turner created this Life Tributes page to make it easy to share your memories.

Send flowers to the Turner family.