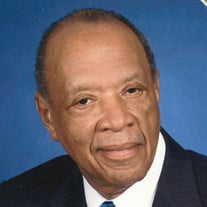 Raymond Chambers age 80 passed away on November 16, 2020. He was born December 4, 1939, in Hot Springs, Arkansas, to the late Clarence Chambers Sr and Colonel Lee Mays Chambers. He was a resident of Conway County for forty-four years. He was a member of First United Methodist Church (FUMC) Morrilton. Raymond has worked as a Social Studies teacher and Coach at Peake High School in Arkadelphia; a Venture Analyst with West Central Arkansas Planning and Development District, in Hot Springs; a Desegregation Consultant with ATAAC Ouachita Baptist University in Arkadelphia; Elected Superintendent of East Side School District in Menifee, AR. He was very instrumental in the smooth transition of the court ordered consolidation of the three school districts; Menifee, Plumerville and Morrilton, which was named South Conway County School District (SCCSD), of which he became Assistant Superintendent. In 1998 Raymond was elected Superintendent of SCCSD where he remained in that position until he retired in 2003. After retiring he served on a Bias and Sensitivity Committee for the Pennsylvania School System. Raymond has done a lot of volunteer work in his community, because he believed in giving back. His volunteer work was cited in the Arkansas Democrat-Gazette News Paper on 09/20/2015 under the title Retired Superintendent has done “world of good”. The Morrilton Area Chamber of Commerce voted Raymond as 2015 Morrilton Citizen of The Year. The Conway County NAACP presented him with their 2015 Presidential Award. Earlier in that same year he received the Prestigious Human Rights Award from the Conway County Church Women United and the Martin Luther King Jr Committee. He was a member of the Community Service Youth Foundation Board of Directors; At FUMC Morrilton he was a member of the Upper Room Sunday School Class, served as an usher and several other committees; A Morrilton Rotary Club Member and the recipient of the Paul Harris Fellow Award; South Conway County School District Foundation Board; Conway County Care Center Board of Directors; CHI St Vincent Morrilton Hospital Advisory Board; President of Conway County Retired Teachers Association and numerous other Committees in Morrilton and Hot Springs. A graduate of the historic Langston High School in Hot Springs; A bachelor of Arts Degree in Sociology from Texas Southern University; A Master of Science Degree in Social Studies from Henderson State University; A Master Of Educational Specialist Degree in Administration from University of Arkansas Fayetteville and a Master Degree in Administration from the University of Arkansas Fayetteville. Other than his parents Raymond was preceded in death by his son, Eric “Ricky” Chambers; brother Clarence (Vhaness) Chambers Jr. Raymond leaves to cherish his memories, his loving devoted and supporting wife Willye of 57 years; son Ivan (Nadine) Chambers Sr. of Aurora, Illinois; Four grandchildren; Ivan Chambers, Jr of Los Angeles, California; Kara (Anthony) Granville of Tucson, Arizona; Erika (Jarrod) Black of Conway, AR; Airelle Chambers of Garland, TX. One Goddaughter; Cristye James Walker of Little Rock, AR and one niece; Anita Renee (Augusta) Farver; of Sherwood, AR; and four Great-grandchildren. He leaves very dear friends Vernon and Consevella James of Little Rock. Memorials services will be 11:00 a.m. Thursday, June 10, 2021 at First United Methodist Church of Morrilton with Pastor Katie Pearce officiating. In lieu of flowers, the family asks that donations be made to First United Methodist Church Morrilton 201 S. Chestnut St. Morrilton AR 72110 or Conway County Care Center, P.O. Box 494, Morrilton AR 72110.

Raymond Chambers age 80 passed away on November 16, 2020. He was born December 4, 1939, in Hot Springs, Arkansas, to the late Clarence Chambers Sr and Colonel Lee Mays Chambers. He was a resident of Conway County for forty-four years. He was... View Obituary & Service Information

The family of Raymond Chambers created this Life Tributes page to make it easy to share your memories.

Send flowers to the Chambers family.