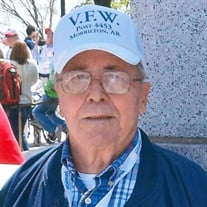 Ralph Edgar Robinson, age 94, of Center Ridge, Arkansas, passed away Monday, July 13, 2020. He was born November 10, 1925 in Fairmont, West Virginia, a son of Ralph Earl Robinson and Eva Thompson Robinson. He was a Navy WWII veteran and a member... View Obituary & Service Information

The family of Ralph Edgar Robinson created this Life Tributes page to make it easy to share your memories.

Send flowers to the Robinson family.