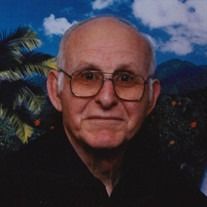 Pete Rossi of Center Ridge, Arkansas was born on February 5th, 1933, to Paul Rossi and Jane DeSalvo Rossi. Pete had two older brothers Angelo and Tony, who were educated at Subiaco. He also had two older sisters, Sr. Mary Paul who was a nurse for 50 years, and Sr. Elizabeth who taught school for over 50 years, all of which who are deceased. Pete is survived by his younger sister Bernadine Noll, of Morrilton, AR. When Pete was 16 years old, his father passed away from cancer, and he had to take over the family farm with his mother and younger sister. When he was 18, he was drafted into service in army engineering. During that time Pete became extremely sick and was hospitalized for 6 months in California. After returning home to help with the farm, he studied and went to V.A. night school. Later, Pete attended Petit Jean Vo-Tech and received his master electrician’s license. He also earned an Arkansas water well license. During this time, he and his brother Tony had a winery for many years. Later, he worked at Arkansas Kraft paper mill for 11 years. Pete then ventured out and opened his own business, Rossi Electric, which he ran for 28 years. Pete used his knowledge and business to help friends, neighbors, farmers, and poultry growers. This often included opening late at night if they needed help. Pete loved to sing. He was a member of Wagon Wheel Jamboree, Silver and Gold, Morrilton Our Town Singers, and most important St. Joseph’s Choir. He was a master of making peanut brittle, one year making over 400 lbs. He was also good at making Italian Sausage. Some years he would make over 1,500 lbs. for friends and family, and that much or more for the church. Pete was Parish Council President for 8 years and a member many more at St. Joseph’s Catholic Church. He loved to travel, and he and his wife toured all but 3 sates: Alaska, Rhode Island, and North Dakota. They also traveled to parts of Mexico and Canada. He married his wife, Jeanette, on August 6th, 1955. For 65 years they shared a life filled with faith, love, family, and friends. While he had many hobbies, his main love was his family, in which he was extremely blessed. Pete and Jeanette had three children: Michael Rossi, and his wife Tami of Guy, AR; Andrea Dobbins (deceased); and Marilyn Stobaugh, and husband Robin of Center Ridge, AR. He was also blessed with 4 grandchildren, 14 great-grandchildren, and 2 great-great grandchildren, which include: Jamianne Johnson (5 children and 2 grandchildren) of Center Ridge, AR; Taylor Polk (2 children) of Center Ridge, AR; Angela McGuigan and her husband A.J. (3 children) of Dover, AR; and Kaitlyn Stell and her husband Cody (4 children) of Greenbrier, AR. Funeral Mass will be 10:00 a.m. Tuesday, June 29, at St. Joseph Catholic Church with Father Joseph Friend, Father Jack Harris and Father T.J. Hart officiating. Burial will be at St. Joseph Cemetery by Harris Funeral Home of Morrilton. Pallbearers will be Rick Beck, Steve Paladino, Kenneth Ferrell, Wesley Honeycutt, Preston Honeycutt, and Ralph Noll Rosary will be 5:30 p.m. June 28, at Harris Funeral Home with visitation to follow until 8:00 p.m.

Pete Rossi of Center Ridge, Arkansas was born on February 5th, 1933, to Paul Rossi and Jane DeSalvo Rossi. Pete had two older brothers Angelo and Tony, who were educated at Subiaco. He also had two older sisters, Sr. Mary Paul who was a nurse... View Obituary & Service Information

The family of Pete Rossi created this Life Tributes page to make it easy to share your memories.

Send flowers to the Rossi family.