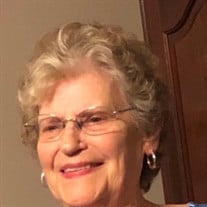 Patricia “Pat” Hart, age 78, of Morrilton, Arkansas passed away Saturday January 23, 2021. She was born February 13, 1942 in Centre, Alabama the daughter of the late Ernest Olen Martin and Vivian Ray Caldwell Martin. Pat was married to the love of her life, Tuffy for 47 years. She was the manager of Mariner II Apartments for 22 years. She ran the apartments like her house, tough but compassionate. Pat and Tuffy started as owner operators of Hart and Hart Trucking, Inc. from 1987 to 1994. After retiring from Mariner II Apartments in 1996, they opened Surplus City in Morrilton. They served their community for 9 years before closing their doors in March of 2007. She was a member of Bethel Baptist Church of Morrilton, Arkansas. Pat was the Matriarch of her family. She had a sense of calm about her and her loving support was felt by everyone. She was genuine, sassy and spunky. She would tell you what you needed to hear, and her clever delivery would leave you agreeing. She was independent and hardworking, always available for a word of encouragement. She was her family’s cheerleader and biggest fan. She was loyal and could be entrusted with the most exciting news or heartbreaking news knowing it would be kept safe. Pat Hart was so many things to so many people, but above all else she was a strong Christian woman. She wanted everyone to know where she was heading on her day of judgement. She knew her home going would be a day of glorious reunion with loved ones gone before her. Pat left no doubt in her salvation. Her life was filled with love...love for Christ and love for her family. She took comfort in knowing her family will all be together again in Glory. In her final days and hours, Pat was surrounded by loved ones with singing praises of her Savior as she stepped into the arms of Jesus. Survivors include her children, Paula (David) Dahlke of Albertville, Alabama; Steve (Joanie) Hart of Morrilton, Arkansas; Janel (Myron) Tilley of Springhill, Arkansas; Patti (Brian) Beijen of Springfield, Arkansas; Brother, Bo (Peggy) Martin of Cedar Bluff, Alabama, Brother-in-law, Paul Norris of Morrilton, Arkansas. Grandchildren, Paul David (Valerie) Dahlke, Stephanie Malone, Dane (Lori) Dahlke, Houston (Kayla) Hart, Beau (Hilary) Dahlke, Breanna (Adam) Chapman, Hart (Cameron) Goad, Chloe Vaught (already home 09/29/20), Sophia Tilley, Jordan Andrews and Joseph Tilley. Great-grandchildren, Addison Malone, Collin Malone, Kinsey Malone, Jones Dahlke, Dash Chapman, Easton Andrews, Gracie Powell, Luke Powell and Nolie Sanders (as well as another great grandson expected in April 2021). Preceded in death- Othel (Tuffy) Hart, husband; Lanier Martin, Caldwell Martin, Freck Martin, Anne Norris, Dawn Martin all siblings of Cedar Bluff, Alabama. We would like to thank Conway CARTI and Arkansas Hospice for all their loving care shown to our precious mother. Funeral services will be 2:00 p.m. Thursday, January 28, at Bethel Missionary Baptist Church with Bro. Jim Mullins and Bro. Verlon Wood officiating. Burial will be at Elmwood Cemetery by Harris Funeral Home of Morrilton. The family will receive friends one hour prior to service, at the church. Pallbearers will be P.D. Dahlke, Dane Dahlke, Houston Hart, Beau Dahlke, Adam Chapman, Cameron Goad, and Joseph Tilley. Honorary pallbearers will be all her granddaughters.

The family of Pat. M. Hart created this Life Tributes page to make it easy to share your memories.

Send flowers to the Hart family.