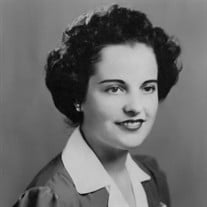 Norma Jean Goatcher Calhoun, age 100, of Morrilton, Arkansas, passed away Friday, January 7, 2022. She was born February 12, 1921 at Formosa, Arkansas to the late Laura Nona Hammett Goatcher and Homer Loal Goatcher. She was preceded in death by her parents, sister, Wilma Sigler, brother, William Loal Goatcher, and grandson, Steven Calhoun. Mrs. Calhoun taught school most of her adult life and was affectionately known as Miss Norma, by her friends and family, or Miss Calhoun by her many former students. She taught her first term in a one-room schoolhouse in the Archey Community near Botkinburg, AR in 1940. She later taught at Half Moon School, Elba AR and Lord’s School in Conway County both one-room schools with students in grades one through eight, which was common in rural Arkansas at the time. She also taught at Formosa High School, Southside High School, Bee Branch, AR, Barrens Elementary near Clinton, AR, Bigelow School District, Wonderview High School, Perry Elementary, Plumerville High School and retired at Northside & Reynolds Elementary in Morrilton, AR in 1983. Mrs. Calhoun attended Central College in Conway, an all-girls school, and Arkansas Tech in the 1940s. She earned a Bachelor’s and Master’s degree in Education from Arkansas State Teachers College (UCA). She would later earn degrees in English, Library Science, and Elementary Education. During her long career in public education, she taught elementary school, high school English, and was also high-school librarian. She taught herself to read at an early age from the Kansas City Star newspaper that was delivered by the U.S. Mail weekly to her grandparents. Her love of books continued throughout her lifetime and she would often read sixty or more books a year, even at an advanced age. Mrs. Calhoun loved birds, flowers, and gardening and worked part-time as a florist after retiring. Mrs. Calhoun had many interests, but her life was devoted to family. She met and married her late husband, Patrick Calhoun, while she was working part time in Little Rock between school semesters in 1943. Sgt. Calhoun was stationed at Camp Joe T. Robinson at the time and was reassigned by the U.S. Army to Camp Fannin in Tyler, Texas only a few days after their marriage. As a young bride of only 22, Mrs. Calhoun traveled alone by train to Washington D.C. to join her husband who had been transferred to Fort George Meade, Maryland, before being shipped out to England in preparation for the Normandy Invasion. Sgt. Calhoun served with the U.S. 4th Army Division in France where he was wounded during the Battle of St. Lo. Sgt. Calhoun wrote many letters to his wife while convalescing in a military hospital in Cardiff, England. The war department censored letters home during wartime, and without knowledge to the extent of her husband’s injuries, Mrs. Calhoun spent the next eight months pacing her father’s farm until her husband returned home in the spring of 1945. Mrs. Calhoun served many local organizations as Commander of the Disabled American Veterans Auxiliary, Librarian at Calvary Baptist Church, and Ambassador for the Morrilton Chamber of Commerce, President of St. Anthony’s Hospital Auxiliary, hospital gift shop manager, and President of Retired Teachers Association. She was a lifelong Baptist and her Christian faith played an important role in her life’s many roles as wife, mother, and teacher. She often told her family that she wanted to be remembered by Proverbs 31:10 “Who can find a virtuous woman? For her price is far above rubies.” Mrs. Calhoun had a wonderful voice and most of her singing was confined to traditional gospel at church. In an unguarded moment however, she could occasionally be heard singing along to a Patsy Cline record at home perfectly matching all the high harmonies. Upon reaching the age of 100, she was asked about her recipe for a long life to which she replied, “Live right, love your family, and stay close to God” along with a healthy dose of “home cooking with garden raised vegetables.” She was an avid walker and attributed her longevity to daily walks (except on Sundays) through the neighborhood. She began walking for exercise in her early fifties and continued to enjoy walking for exercise into her nineties. She is survived by her three children, Mona Kaye Scroggins (Jerry) of Morrilton, Patrick “Rick” Calhoun (Julie) of Little Rock, and Mark Calhoun (Jane) of Bigelow, AR; four grand children, Susan Dumas of Morrilton, Mary Katherine Rambo of Nashville, Tennessee, Elizabeth Calhoun of Los Angeles, California, and Shannon Scroggins of Morrilton; and six great grandchildren. Due to the current spike in Covid cases and for the safety of family & friends, there will be no funeral or family visitation. A memorial service and celebration of her life may be held at a future date. Burial will be at the Union Hill Cemetery in Formosa, Arkansas by Harris Funeral Home of Morrilton following a private graveside service. The family wishes to express their heartfelt gratitude to her caregivers, Jana, Susan, Mary, Nicole, and Kindred Hospice for their love and care. In lieu of flowers, memorials may be sent to the Calvary Baptist Church, 521 Clifton Street, Morrilton, AR 72110 or the St. Anthony’s Hospital Auxiliary, Attn: Delores Hartman, 4 Hospital Drive, Morrilton, AR 72110.

The family of Norma Jean Goatcher Calhoun created this Life Tributes page to make it easy to share your memories.

Send flowers to the Calhoun family.