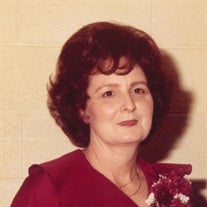 Myra Joyce Russell Coats, age 88, of Kenwood, Arkansas, went to be with the lord Thursday, June 3, 2021. She was born October 4, 1932 in Kenwood, Arkansas, a daughter to the late T.J. “Tommy” Russell and Myrtle Lucille Mangus Russell. She was the widow of William Ralph Coats and was the oldest of five siblings, a long-life resident of the Kenwood community. Joyce was a Christian, and attended the Downtown Church of Christ in Morrilton. She attended school at Blackwell and Morrilton. She graduated from Morrilton High School in 1950. Joyce first met her U.S. Navy sweetheart Ralph at the Blackwell skating rink and they later married on June 26, 1952. Joyce worked seventeen years as a secretary at Crompton Arkansas Cotton Mill in Morrilton until her health prevented her from working outside the home anymore. Joyce was a wonderful wife and mother, a very good housekeeper and wonderful cook. She was known for her wonderful pies, she was especially known for her divinity, brittle, and fudges she made at Christmas and sometimes Valentine’s Day. She was a very good seamstress and did beautiful needlework until her bad eyesight no longer allowed her to do it as a hobby. She loved her granddaughter, Ashley so much and Ashley cherished her "Nena". She loved her two Pomeranian dogs, which she owned at different times of her life. They were her sweet companions after her husband Ralph passed. She is survived by her daughter, Linda (Robert) Carruthers; nephews, Curtis Russell, David Russell, Donnie Russell, Tommy Joe Cothren, and Terry Cothern; niece, Debbie Russell Bolin; Sister in laws, Charlotta Russell and Norma Russell. Other than her parents and husband she is preceded in death by, granddaughter, Ashley Carruthers; mother-in-law Zetta Ashcaft; sister, Sue Cothern; brothers, Paul, Ray and David Russell; nephews, Charlie Russell and Tom Russell. In lieu of flowers please make donations to The Downtown Church of Christ, at 100 West Church St., Morritlion, AR. 72110.

The family of Myra Joyce Russell Coats created this Life Tributes page to make it easy to share your memories.

Send flowers to the Coats family.