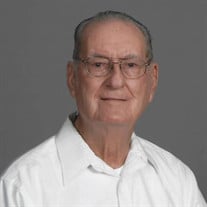 Milford Oscar Sharp, age 92, peacefully passed from this earthly life and into the arms of Jesus, on Friday, June 5th, 2020, at his home in Perry, Arkansas, surrounded by his family. He is survived by his three daughters and sons-in-law: Nancy Bunton, Martha and Terry Bull and Judy and Bobby Hammons, all of Perry; his grandchildren: Brad Bull, Stephanie and James Risner, Chelsey Bull, Krystal Hammons, Casey and Mark Rucker, Charlie Hammons and fiancé Aly Dicker; Great-grandchildren: Gunner Rhoads, Lexie and Olivia Bull, Chloe and Drake Anderson and Annabelle and Lawson Rucker. He is also survived by his sister and brother-in-law: Joyce and Pete Evans; brother-in-law Bill Spence; sister-in-law Shirley Bean Crawford and a host of nieces, nephews and many friends and family. He was born December 27, 1927 to the late Ervin and Dora Sharp. Other than his parents, he is preceded in death by Jimmie Laverne Spence Sharp, the love of his life, that he was married to for 67 years. He is also preceded in death by an infant brother, Mervin, a son-in-law, Danny Bunton, and a granddaughter, Rachel Bull. He was a devoted father and grandfather. He raised his daughters in church and lived out a Godly life in front of them, believing in them and supporting them in all they did. He always exhibited love and respect. After losing his wife in 2017, he still enjoyed seeing his children, grandchildren and great-grandchildren. He lit up when the babies entered the room! He loved all of his family and they are what kept him going, along with his church family that he dearly loved. He went to church until he absolutely, physically could no longer make it. If one Sunday morning could have been spent watching him get ready for church, and the struggle and effort he had to endure, it would make people think differently about sitting out a Sunday here and there because of a little pain. It was painful for him to sit through an hour of church and then get his legs to straighten out and make it back to the car on his walker. However, that is how much it meant to him to be there. He made the effort because he WANTED to!! He loved the Lord and he loved the fellowship of his friends and church family. He was a deacon at Oppelo First Baptist Church. He had been a deacon for many years. He was ordained as a deacon at what was then Riverview Missionary Baptist Church in May 1960. He also served as deacon at Perryville First Baptist Church. He was a quiet man but he had a keen eye and he knew who was and wasn’t at church. If someone wasn’t there, he wanted to know why. He used to visit folks when he was able, and when he was no longer able to visit, he would call people. When he got to the point that he couldn’t hear well enough to call, he would have his girls call for him. He always found a way to check in on those who were missing or were sick. He never lost his caring, servant’s heart. He loved gardening, canning and growing enough to share the bounty with his friends. Nothing made him happier than to be able to share vegetables out of his garden with his friends. He always helped with the freezing and canning and made sure there was enough for all the kids to have whatever they wanted. He retired from the Coca Cola Bottling Company in Morrilton when they ceased plant production in Morrilton. He had been the Production Manager for many years. Prior to that, he worked for the Morrilton Dairy Company delivering milk. There will be a graveside service at McGhee Cemetery (3.7 miles west of Perry on Hwy 10) on Wednesday, June 10, 2020 at 10:00 a.m. If you would like to sit, please bring your own chair. We will have some young men shuttling people from the highway to the graveside. Bro. Gene Tanner and Bro. Brad Underwood will be officiating. Pallbearers are Brad Jones, Phillip Bean, David DuFresne, Mark Roland, Willie Bob Summers, James Evans and Jerry Spence. Visitation will be Tuesday evening, June 9, 2020 from 5:30 p.m. - 7:00 p.m., at Oppelo First Baptist Church. We are requesting that you observe social distancing guidelines. We will have masks available if you don’t have one. For the safety of everyone, we ask that visiting with friends take place outside in the parking lot after you have visited with the family. Milford’s favorite verse was Ephesians 2:8-9. “For by grace are ye saved through faith. And that not of yourselves. It is the gift of God. Not of works lest any man should boast.” In lieu of flowers, memorials may be made to: Gideons, P.O. Box 21, Morrilton, AR 72110. This memorial gift will help further the good news of God’s amazing grace!

Milford Oscar Sharp, age 92, peacefully passed from this earthly life and into the arms of Jesus, on Friday, June 5th, 2020, at his home in Perry, Arkansas, surrounded by his family. He is survived by his three daughters and sons-in-law: Nancy... View Obituary & Service Information

The family of Milford Oscar Sharp created this Life Tributes page to make it easy to share your memories.

Send flowers to the Sharp family.