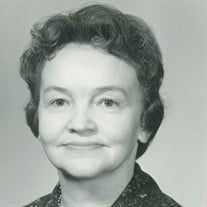 Mildred Moore Harton Poindexter, age 103, of Morrilton, Arkansas, died, peacefully, in her sleep, Saturday, December 12, 2020, in Arkansas Hospice House, Russellville, Arkansas, which has been her home since September. She was born November 27, 1917 in Conway, Arkansas, a daughter of Benjamin Moore Harton and Mildred Emma Johnson Harton. She attended Hendrix College and graduated from Arkansas State Teachers College in Conway. “Micky” was fiercely independent for all of her 103 years. She was the first manager of the Sears catalog store which opened in Morrilton in the 50s and a teacher and librarian in the Morrilton school system for many years. Growing up in a big family in Conway, she felt her Conway roots for a long time, but as time went by, she put down deep roots in the Morrilton community. She loved its people, its children, and its institutions. She left her childhood 1st Methodist Church in Conway when she married Paul, and joined him as a member of 1st Presbyterian Church in Morrilton where she was an active member for the rest of her life. Until her last four weeks on this earth, she continued to get the prayer list from the church and prayed faithfully for those friends in need and continually inquired as to the specific needs and outcomes of those prayers. She taught Sunday School, women’s Bible studies, and was a member of Bible Study Fellowship for many years. ‘In retirement’, on the advice of friends, she became a fan of the Golden State Warriors and looked forward to basketball season every year. She knew when they were going to play, who they were playing, and the stats for her favorite players. She kept up with those boys like she did with her Sears ‘customers’ and her Morrilton students. She grieved for them when she would read an obituary of someone’s mother or child and would rejoice to read of a birth, marriage, election, or other success story of any of them. Once, when called on for jury duty, she realized that the judge as well as both the prosecuting and defense attorneys has been her students. She could make anything grow in her garden, enjoyed bird watching, and solving the most difficult cryptoquotes she could find. Other than her parents, she was preceded in death by her husband, Paul C. Poindexter; her son, Paul “Dek” Poindexter, both of Morrilton; three siblings: Florrie Harton Marquette of Colorado, Daniel O. Harton of Tennessee, and Terry Lossee of Pennsylvania. She is survived by two daughters, Libby (Rommy) Henley of Russellville and Midge (Randy) Bottoms of Waldron; grandchildren: Rommy D. Henley of Springdale, Holly Pace of Russellville, Brian Poindexter of Oppelo, Laura and April Bottoms of Waldron; and six great grandchildren. Private burial will be at a later date. In lieu of flowers, memorials may be made to 1st Presbyterian Church in Morrilton, Arkansas, Arkansas Hospice House, 220 John Babish Lane, Russellville, AR 72801, or Mildred and Paul Poindexter Scholarship Endowment, 5 Allied Drive, Suite 51110, Little Rock, AR 72202.

Mildred Moore Harton Poindexter, age 103, of Morrilton, Arkansas, died, peacefully, in her sleep, Saturday, December 12, 2020, in Arkansas Hospice House, Russellville, Arkansas, which has been her home since September. She was born November... View Obituary & Service Information

The family of Mrs. Mildred Moore Harton Poindexter created this Life Tributes page to make it easy to share your memories.

Send flowers to the Poindexter family.