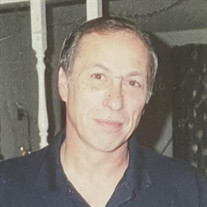 On Thursday, September 16, 2021, Michael Brown, loving husband, father, grandfather and great grandfather, had his sunset at the age of 74. Michael began spreading sunshine to Noble and Martha Brown on March 29, 1947 in Lansing, MI. He worked for General Motors for 30 years and retired in 1998 (after retirement he remained loyal and never owned a non-GM vehicle). On August 20, 2001, he married his best friend, Karen Brown. Michael had a passion for helping others. He never met a stranger and would help anyone with a need. Many remember his willingness to help no matter the task. You would always see him working around the church when a need arose. His support for the things of God was a reflection of his love for the Lord. He also had a passion for cars. He loved doing body work and taking a junk car and turning into a treasure. He was known for his quick wit,kind eyes, infectious smile and his loving and compassionate spirit. He has been referred to as “The man with the biggest heart.” Michael is preceded in death by his father, Noble, Mother, Martha, 2 sisters, and three brothers, as well as his two granddaughters, Alyssa Ide and Cloe Ide. He is survived by his best friend and loving wife of 20 years, Karen. His seven children, Kayla, Morrilton; Emily (Travis), Fayetteville; Larry Cratty, Oklahoma City, Oklahoma; Traci Robinett (Jeff), Edmore, MI; April Labadie, (Matt Ide), Lansing, MI; Rodney (girlfriend Marie), East Lansing, MI; and Todd Brown, Edmore, MI. He is also survived by his nine grandchildren and several great grandchildren as well as nieces, and nephews. Funeral services will be held on Saturday, September 25th, 2021 at Harris Funeral Home in Morrilton. Burial will be at Thornburg Cemetery. Visitation will start at9:00 am with the celebration of his life starting at 10:00. In remembrance of him, please feel free to wear blue as it was his favorite color. Arrangements are by Harris Funeral Home of Morrilton.

On Thursday, September 16, 2021, Michael Brown, loving husband, father, grandfather and great grandfather, had his sunset at the age of 74. Michael began spreading sunshine to Noble and Martha Brown on March 29, 1947 in Lansing, MI. He worked... View Obituary & Service Information

The family of Michael Lynn Brown created this Life Tributes page to make it easy to share your memories.