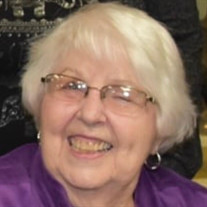 Mary Faye Barnes Williams, age 88, of Morrilton, passed away Friday, December 20, 2019. She was born January 18, 1931 in Grant County, a daughter of the late Calvin Barnes and the late Zelma Wilkinson Barnes. She was a member of Calvary Baptist... View Obituary & Service Information

The family of Mary Barnes Williams created this Life Tributes page to make it easy to share your memories.

Send flowers to the Williams family.