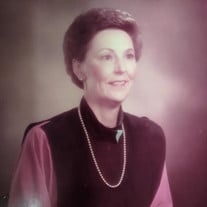 Mary Ellen Gray Cheek, 87, of Morrilton, Arkansas, passed away Wednesday, October 6, 2021. She was born in Linn County, Kansas in 1934. She is the daughter of John Wolfinger and Jessie Ellen Cross Wolfinger. She graduated from Linnville Schools in Pleasanton, KS and graduated from college at Kansas State University. She married Norman Gray and they relocated to Georgia while Norman served in the military. After Norman completed his military service and his veterinarian, they chose Morrilton, Arkansas to call home and open the Veterinarian clinic. She was an active member of the community and devoted member of the First United Methodist Church of Morrilton. While being a mother and grandmother was her number one joy, she was a spirited lady with an entrepreneurial spirit. She managed her family farm and homestead throughout her life and also opened "The Fabric and Drapery Shop" in downtown Morrilton. Her grandchildren have fond memories of playing hide and seek between the drapery displays as their grandmother worked behind the counter. Mary Ellen was also known for her delicious cooking. She prided herself on being able to nurture her family and friends through her pies and cakes. There was no limit to the love and support that she gave her children and grandchildren, as they were her greatest blessing in her life. Mary Ellen is preceded by her parents John & Jessie Wolfinger; her first husband Norman Gray; son Franklin John Gray, and daughter in law Cindy Gray. She is survived by Grandchildren; Franklin John Gray, Jr and wife Mandy Gray of Little Rock, AR; Joseph Robert Gray and wife Stephanie Gray of Fayetteville, AR; daughter Jessie Ellen Gray of Pensacola, FL. Also survived by grandchildren Georgia Katherine Gray of Little Rock, AR and Joseph Robert Gray Jr of Fayetteville, AR. Mary Ellen is also preceded by her second husband, William “Bill” Cheek of Morrilton; survived by children William “Bill” Cleo Cheek, III of Maumelle, AR, George Richard Cheek of Fort Worth, TX, James Earl Cheek and wife Michelle of Morrilton, AR and Laura Cheek Larson and husband David of Maumelle, AR. A small, private gathering will be held in honor of Mary Ellen for immediate family members only. Friends wishing to honor her are invited to make a donation in her name to the First United Methodist Church of Morrilton, AR.

Mary Ellen Gray Cheek, 87, of Morrilton, Arkansas, passed away Wednesday, October 6, 2021. She was born in Linn County, Kansas in 1934. She is the daughter of John Wolfinger and Jessie Ellen Cross Wolfinger. She graduated from Linnville Schools... View Obituary & Service Information

The family of Mary Ellen Gray Cheek created this Life Tributes page to make it easy to share your memories.