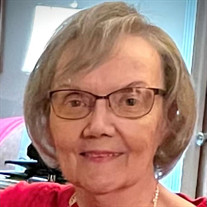 Martha Nooner Nelson, 73, of Morrilton, died Wednesday, March 3, 2021 at home under Hospice care. She was born July 24, 1947 in Nashville, Tennessee, and was the last of three children of the late Earl and Ruby Sadler Nooner. She is survived by her husband of 52 years, Stewart Paul Nelson, sister Joyce Moninger (Danny Kennedy) of Loveland, Colorado and brother Wayne (Jannie) Nooner of Nashville, Tennessee and a family of very close friends, Karen Cree, Rev. Larry Miller, Zoe Butler, her Taco Tuesday group Kathy Bryan, Alice Fleeman and Phylllis McKuin. She and her husband have lived in Morrilton for 47 years and she claimed this group as part of her extended family. Martha was a Registered Nurse and a Case Manager Nurse. She attended Tennessee Tech and graduated in Memphis from the University of Tennessee Medical Units in Nursing the day after her wedding. She received her Master’s Degree in Education from UCA in Conway. Her nursing career included service in Memphis, Martin, Knoxville, Tennessee and Morrilton. She was a student teacher at UCA, a nurse and nurse recruiter at St. Anthony and later St. Vincent Hospital in Morrilton. As a Case Manager she worked in Arkansas and surrounding states for Systematic in Little Rock. When she moved to Morrilton with her husband who was working at Levi Strass in 1972, she gave him three years to move away. Four years later, after he had accepted a job in Memphis, she gave him five days to move back. She had fallen in love with Morrilton and her close friends she made here. Martha became a member of the First United Methodist Church in Morrilton and served as the Upper Room adult Sunday School class teacher for many years with her husband and has attended Morrilton Christian Center during the COVID-19 period. She was diagnosed with stage four ovarian cancer in 2018 and with the wonderful help of Dr. Robert Wilkerson of Morrilton, Dr. Mariana Harrington of CARTI in Little Rock, and Dr. Amir Jazaeri of the MD Anderson Medical Center, she survived an additional three years. She expressed her gratitude for these and others that gave her encouragement along the way. Following a private burial at Elmwood Cemetery on Friday a memorial service will be held 12 noon Saturday at Morrilton First United Methodist Church.

Martha Nooner Nelson, 73, of Morrilton, died Wednesday, March 3, 2021 at home under Hospice care. She was born July 24, 1947 in Nashville, Tennessee, and was the last of three children of the late Earl and Ruby Sadler Nooner. She is survived... View Obituary & Service Information

The family of Martha Nooner Nelson created this Life Tributes page to make it easy to share your memories.

Send flowers to the Nelson family.