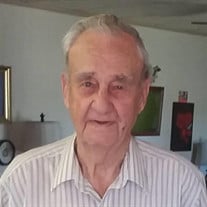 Marion J. Henderson, age 89, of Jerusalem, Arkansas, passed away Sunday, May 10, 2020. He was born February 1, 1931 in Jerusalem, Arkansas, a son of Jeff Henderson and Nina McCoy Henderson. He was preceded in death by his wife of 68 years Ima Louise Huneycutt Henderson, and his daughter, Sheila Sommers. Marion was a machine operator and a member of Jerusalem Church of Christ. He enjoyed playing music with the Mountain Music Makers. He was also known as Powder Keg. He is survived by his son, Dennis (Annette) Henderson of Ft. Worth, Texas; grandchildren, Aaron (Karen) Henderson, Melanie (Jon) Ford, Matt (Ashley) Henderson, and Justin (Jessica) Sommers; great grandchildren, Nathan and Nicholas Henderson, Phillip and Anna Ford, Wade and Joseph Sommers, and Annilee Henderson; brother, C. W. Henderson of Atkins; and sisters, Gemima Condley of Hector, Geneva Dixon of Atkins, and Ola Mae Robbins of Malvern. The family will be having a private graveside service. In lieu of flowers, memorials may be made to the Jerusalem Church of Christ, P.O. Box 5, Jerusalem, AR.

The family of Marion J. Henderson created this Life Tributes page to make it easy to share your memories.

Send flowers to the Henderson family.