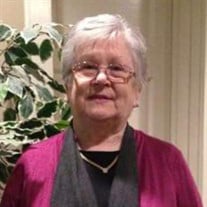 Margaret Joann Tilley Whittington, age 80 of Mayflower was welcomed into the presence of our Lord on Monday, February 22, 2021. She was born to Tollie Tilley and Edna Brents Tilley on February 3, 1941 in Cleveland, Arkansas. She was raised in a loving Christian home with her 5 sisters and 2 brothers with whom she remained close for the rest of her life. She graduated from Morrilton High School where she met the love of her life James Whittington. They were married February 5, 1961. After they were married, she and James lived in Chicago briefly before returning to Arkansas. She worked as a dental assistant before starting a career with Sears where she spent the next 30 years and from which she ultimately retired. After raising their family in North Little Rock they moved to Mayflower to retire. She attended Mayflower Lakeside Assembly of God. She was most proud of her family for which her love and generosity knew no bounds. She felt the greatest accomplishment of her life and her greatest blessings were her children, grandchildren and great grandchildren. The sound of her softly singing and humming filled the home and were a reminder of how much she loved them and will remain in their hearts forever. You were always welcomed with a smile and a hug. Margaret was a true southern lady and her genuine caring and compassion were unmistakable. She loved to laugh and no one could resist laughing with her. She spent her life doing for others and giving of herself to ensure they were taken care of and happy. She was preceded in death by her parents, her husband James, sisters Bonnie Chism, Bobbie Gipson and Wanda Jean Tilley and her brother Carrol. She is survived by son Ted Whittington(wife Emelyn) of Mayflower, daughter Terri Whittington Dombroski(husband Gary) of Dothan, Alabama and daughter Jamie Whittington Baker(husband Kevin) of Tulsa, Oklahoma. She is also survived by her brother Clellan Tilley of Atkins, sister Carolyn Ness of Enola and sister Nancy Brooks(husband James) of Dover. Her grandchildren James Aaron Baker and wife Mallory, Haley Baker, Drake Dombroski, Tilley Dombroski, Lily Whittington, James Whittington and Geta Istoica. Great grandchildren Joi Claros and Phoenix Baker. Services will be 2:00 p.m. Tuesday, March 2, at the Harris Chapel. Burial will be at Elmwood Cemetery. Arrangements by Harris Funeral Home of Morrilton.

Margaret Joann Tilley Whittington, age 80 of Mayflower was welcomed into the presence of our Lord on Monday, February 22, 2021. She was born to Tollie Tilley and Edna Brents Tilley on February 3, 1941 in Cleveland, Arkansas. She was raised... View Obituary & Service Information

The family of Margaret Joann Tilley Whittington created this Life Tributes page to make it easy to share your memories.

Send flowers to the Whittington family.