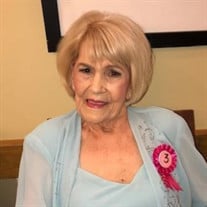 Mabel B. Huett Rollins Huckaby, age 93, of Conway, Arkansas, passed away on Sunday, January 9, 2022. This is the story of my life. I was born October 28, 1928, in Birdtown, Arkansas to Jacob Calvin Huett and Sreathie Gordon Huett. I was preceded in death by my parents and two brothers, Freddie Bearden Huett (infant), and Jessie Conrad of Blue Springs, MO. I grew up in Wright, Arkansas and graduated from Plum Bayou High School in 1945. The preceding year, in 1944, I was a National Blue Ribbon Award recipient in the 4H Club Dress Review for the ensemble I made for a cost of 75 cents that included a skirt and jacket made from flower-printed feed sacks, and a blouse, hat, and handbag made from white flour sacks. I attended the national convention in Chicago, IL to receive my award. Following graduation, I attended Arkansas State Teachers College (now the University of Central Arkansas) in Conway on a full academic scholarship. Receiving my degree in Education, I then returned to Wright, Arkansas where I taught school for 5 years. During this time, I had my 2 children, was married, and divorced. I went on to teach school in Georgia for 3 years, England, AR for 1 year, and then worked in a doctor’s office in Morrilton, AR for several years before getting into the nursing home industry. For 4 ½ years I learned the business, then in its infancy in Arkansas, working for Leisure Lodge Nursing Homes as a General Manager and Administrator because Mr. Steve Creekmore gave me a chance. I then moved to Hot Springs, Arkansas to help open and run the Hot Springs Nursing Home before finally leasing a nursing home of my own to operate, Pine Bluff Nursing Home. It was at the state nursing home convention in February of 1969 that I met the love of my life, also in the nursing home business and also from Pine Bluff, Mr. Ray Huckaby. We were married October 7, 1969 in Nuevo Laredo, Mexico. Returning from our Mexican honeymoon, we bought a nursing home in England, Arkansas and renamed it Delta Nursing Home. After 14 years, we sold it to my daughter and son-in-law, Kaye and Emmitt Henderson, and went on to build and operate the Cumberland Nursing Home in Little Rock from 1973 to 1986. From there we moved to Hot Springs, Arkansas and lived on the lake while Ray sold real estate. In 2002 we moved to Conway, next door to the nursing home my daughter Kaye owned, Heritage Living Center. In 2009 Ray moved into the nursing home with Alzheimer’s and Dementia, and on January 28, 2014, the love of my life left this world to be with his Lord and Savior, Jesus Christ in heaven. I moved into the nursing home a few years later, and have now gone on to join Ray in heaven. We agreed to meet under a large Oak tree by the river where Ray said he would be waiting for me whenever I got there with a bouquet of roses. I achieved my hearts’ desires in this life; I wanted to be a school teacher and I became that. I wanted to be a nursing home administrator and owner and I did that. I wanted to see my children and grandchildren follow in our footsteps and carry on our legacy and I was blessed to live to see that. I thanked the Lord every day for my family – I wrote this obituary myself, and want to say, “May God bless all of you, my family.” I am survived by my son Calvin D Rollins (Nancy) of Cabot, daughter, Kaye Henderson (Emmitt) of Hot Springs, Arkansas, stepdaughters Linda Webb (Jimmy) of Wright, Marcia Lybrand (Joey) of Pine Bluff, and stepson Billy Huckaby of Little Rock as well as a host of nieces and nephews, cousins and dear friends, grandchildren, great-grandchildren, and great-great-grandchildren who all dearly loved their Nannie. Service will be held at 2:00 p.m. Thursday, January 13 at the Harris Funeral Home with Stephen Dickinson officiating. I will then be buried next to my loving husband, Ray, at Kilgore Cemetery on Highway 9 between Birdtown and Solgohachia, Arkansas. The family will receive friends one hour prior to services.

Mabel B. Huett Rollins Huckaby, age 93, of Conway, Arkansas, passed away on Sunday, January 9, 2022. This is the story of my life. I was born October 28, 1928, in Birdtown, Arkansas to Jacob Calvin Huett and Sreathie Gordon Huett. I was preceded... View Obituary & Service Information

The family of Mabel Huckaby created this Life Tributes page to make it easy to share your memories.

Send flowers to the Huckaby family.