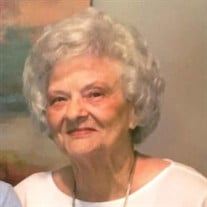 Lou Elder Moll, 88, of Morrilton, died January 31, 2022. She was born July 17, 1933, at Brush Creek in Plainview, AR. Lou was a devoted member of Sacred Heart Church and a past member of the Sacred Heart Altar Society. She graduated from Perryville High School in 1950. During high school, she was a member of the senior girls' basketball team, and had a leading role in the junior class play. She was co-owner of Moll's Cafe prior to her twenty-seven dedicated years at Levi Strauss & Co. She wore many hats and aprons in her career. She was a Quality Auditor for twenty-six years and an amazing seamstress. Lou always considered her greatest gift to be her children, grandchildren, and great-grandchildren. The thing she was most proud of was her big family, which she had always longed for growing up. She was opinionated, detailed, and efficient. She had no problem letting you know just how it was! She could be blunt, sharp, generous, and kind all at the same time. She loved to bake on the weekends, and always made sure her beloved grandchildren were fed when they came over to visit. On February 18, 1950, she married Raymond C. Moll who preceded her in death on August 16, 1982. On December 28, 1984, she married William Henry Moll, Ray's first cousin, who preceded her in death on March 12, 2018. She is survived by her children, Sheila R. (Stan) Willis, Ruby A. (Michael) Shoesmith, Raymond C. (Gabe Gartman) Moll, Jr., and Rhonda K. Moll Robin all of Morrilton; her grandchildren Kristian Willis (Jason) Poole, Jennifer L. Willis (Josh) Berkemeyer, Scott C. (Sumer) Willis, Bryan D. (Kristi) Shoesmith, Michelle L. Shoesmith (Matt) Jones, Ashley N. Robin (Nathan) Gray; great-grandchildren Emily Poole (Emilio) Medina, Andrew Poole, Jack Poole, Samuel Berkemeyer, Gabby Berkemeyer, Shane Willis, Mason Jones, Maddox Jones, Dagan Shoesmith, Savannah Shoesmith, Gaige Gray, Knox Gray, and Adlee Gray. In addition to her beloved husbands, Raymond and Henry, she was preceded in death by her parents John Franklin Elder and Eunice Rhea Elder, half-brother Otis Hamilton, half-sisters Mazie Hamilton, Grace Hamilton Murphy, and great-grandson Jhet Gray. Her favorite bible quote was "Two are better than one, because they have a good reward for their toil. For if they fall, one will lift up the other; but woe to one who is alone and falls and does not have another to help." Ecclesiastes 4:9-10 (NRSV) Pallbearers are Bryan Shoesmith, Scott Willis, Matt Jones, Jason Poole, Josh Berkemeyer, Dagan Shoesmith, Andrew Poole, Jack Poole, Mason Jones, Nathan Gray, Sam Berkemeyer, Shane Willis, Maddox Jones, Knox Gray, and Gaige Gray. A funeral service will be held at 2:00 p.m. Friday, February 4 at Harris Chapel with Reverends Jack Harris and Joseph Friend officiating. The service will also be available through live stream. Burial will be 10:30 a.m. Monday, February 7, at Sacred Heart Cemetery. Memorials may be made to Sacred Heart Capital Campaign 506 E. Broadway Morrilton, AR 72110.

Lou Elder Moll, 88, of Morrilton, died January 31, 2022. She was born July 17, 1933, at Brush Creek in Plainview, AR. Lou was a devoted member of Sacred Heart Church and a past member of the Sacred Heart Altar Society. She graduated from Perryville... View Obituary & Service Information

The family of Lou Elder Moll created this Life Tributes page to make it easy to share your memories.

Send flowers to the Moll family.