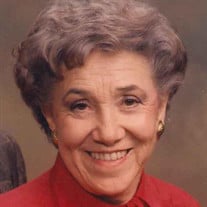 Dr. Loreta Faye O’Neal Holder-Brown, age 87, of Conway, Arkansas, passed away peacefully attended by loved ones at home, Wednesday, March 6, 2019. She was the widow of Edmund Ray “Charlie” Brown. Born Loreta Faye O’Neal in Gravel Hill, Arkansas, on Tuesday, June 23, 1931, she was the eldest daughter of Doyle Clyde and Elmas Athea (Rhoads) O’Neal, and the grand-daughter of John Houston and Savannah Evelyn O’Neal, and James Houston and Mary Elnora Rhoads. She was raised with a strong Baptist faith which stood her in good stead all her life. In 1947, she married James Richard (Buster) Holder, first living in Morrilton, Arkansas then moving to Oregon, where in 1952 she gave birth to the first of their two children, a daughter, Terri Lynn. In 1956, they were blessed with a son, Doyle Kenton. A life-threatening bout of Polio at the age of 4, and the subsequent loss of the use of her left arm inspired in Loreta a lifelong commitment to improving the lives of children with disabilities. At the age of 16 she was awarded her teacher’s certificate and began teaching elementary school in the Springfield public school. She went on to attend Arkansas State Teachers’ College in Conway, Arkansas, earning her Bachelor’s Degree in Education, then her Master’s Degree in Special Education from George Peabody College in Memphis, Tennessee, and finally a Doctorate of Educational Psychology from Southern Illinois University, and became Professor Emerita of Special Education at the University of Alabama in Tuscaloosa in 1973. At a time when few women built careers or aspired to advanced degrees of higher learning, she did both while supporting and raising a family. In 1975 she met her lifelong partner and future husband, “Charlie” Brown, and together they built a life benefitting countless children, as well as the communities in which they lived. Recognizing the importance of early intervention, in 1974 Dr. Holder-Brown founded the innovative RISE Center at the University of Alabama in Tuscaloosa, one of only a handful of experimental programs to win federal grant moneys to provide crucial therapies to special needs infants and support services to their families. RISE has since grown to seven facilities based in major US cities in four states and provides hundreds of children with vital services yearly, enabling them to enter and flourish in the classrooms of mainstream schools all over the country. Dr. Holder-Brown impacted dozens of lives through her doctoral program, and hundreds more through a tiny infant day-school program started in a basement, conceived and directed by her, and funded through grants she wrote. Dr. Holder-Brown worked tirelessly as an advocate for the disabled, and was a constant champion of Tuscaloosa’s disabled community, working in programs such as Tuscaloosa WACS. Retiring from the University of Alabama in 1993, she returned to her Alma Mater, Arkansas State Teachers’ College, which had grown into the University of Central Arkansas, where she taught in the field of early childhood development and special education, and reestablished her home in Central Arkansas. As Dr. Holder-Brown was considering a second retirement she and Charlie Brown founded Mission HELP as an outreach support for orphanages and neonatal hospitals in San Pedro Sula, Honduras, where they supported and resupplied a neonatal intensive care unit and established and funded programs to train childcare providers to treat physically disabled children. RISE Schools of Tuscaloosa, Austin, Dallas, Denver, Houston, Huntsville, and Stillwater, and Mission HELP of Honduras (now a part of the Friends of Barnabas outreach) stand as a testament to the heart Dr. Holder-Brown had for children and the tenacity with which she pursued her vision. Loreta spent her retirement years advocating for and directly supporting the Mission she and Charlie Brown created and funded, and enjoying seeing her many grandchildren and great-grandchildren grow. She was blessed with a long life, never squandering a moment, but constantly pursuing her calling - to improve the conditions of lives impacted by disability. Though she earned awards and accolades too great to list, her true legacy lives on in the children she loved and supported all her life. Loreta is survived by her daughter, Terri York of Holland, Arkansas; her son, Kent Holder and wife, Shawna, of Conway, Arkansas; grandchildren, Rusti Barger and husband, David, of Quitman, Arkansas, Devin O’Neal York and wife, Krista, of Cave Junction, Oregon, Riley O’Neal Holder and wife, Toi, of San Diego, California, Destiny Branscum and husband, Ethaen, Serenity, Avery, and Amity Holder, all of Conway; great-grandchildren, Ashlee, Lane (Lillie), Arin, Duncan, Sameah, and Clair Barger; a great-great-granddaughter, Rosalee; brother, Jerry O’Neal and wife, Ruth; sister, Nell Miller and husband, Don; brother, Jimmy O’Neal and wife, Dorothy, all of Cleveland, Arkansas. Loreta was also blessed with a host of nieces and nephews whom she loved dearly, as well as countless friends whom she counted among her greatest blessings. Funeral services will be held 10:00 am Saturday, March 9, at Cleveland Baptist Church, with Rick Miller officiating. Burial will be at Old Liberty Cemetery, with Harris Funeral Home of Morrilton. The family will receive friends from 6:00 to 8:00 pm Friday at Harris Chapel. In lieu of flowers, it was Loreta’s wish that donations be made to RISE School of Tuscaloosa, c/o Kent Holder, 620 Whispering Wind Circle, Conway, AR 72034.

The family of Dr. Loreta Faye Holder-Brown created this Life Tributes page to make it easy to share your memories.

Send flowers to the Holder-Brown family.