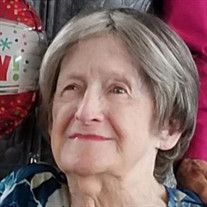 Llewellyn (Melville) Gasaway, the 8th of 15 children, was born to Leon and Maybelle (Segers) Melville October 3, 1930 in Brookhaven, MS. She attended school in Louisiana where she was involved in basketball and drama club. On February 4, 1950 she married Leon Dale Gasaway. Their one and only child, Karen Gail, was born in 1950. In search of a better life for their young family, Leon and Llewellyn moved to California in 1951. They originally lived in Northern California and later settled in Southern California. Llew began her career as a bank teller at Bank of America and retired as Operations Manager in 1985. She and Leon loved to travel and took many trips in their 52 ½ years of marriage. They enjoyed exploring the US and took many international voyages as well. They especially enjoyed traveling by cruise ship. Because they valued family so much, trips home to Arkansas and Louisiana were made a yearly priority. When the grandchildren started arriving, they too were included in Leon and Llew’s travels. Favorite trips include those to Niagara Falls and a Caribbean cruise. Llew was a very hard worker who always maintained a sweet and quiet spirit. She enjoyed sewing and crafting so much that even Karen’s clothes were always handmade. Her spirit of hospitality could be seen in the many friends she hosted for card games, dinners, and her love of splendid holiday décor. Both Leon and Llewellyn made doting on their grandchildren a high priority. Jeremy remembers many sleepovers where they ate chocolate and biscuits and watched The Jeffersons together. Karie remembers her grandparents flying to Iowa and staying with them when her parents were away. Amy’s special memory is their trip to Niagara Falls. Going to their home on Petit Jean and running to find her specially prepared frozen chocolate dessert in the deep freeze will always be dear to Josh. After Leon’s death in 2002, Llew moved full time to Arkansas and later, in 2006, moved to Iowa to be closer to Karen. She lived at Murphy Place until 2010, when she moved to Corydon Specialty Care. There she made her home until her death on November 9, 2020. Even though we miss her, we are comforted by the words “But I would not have you to be ignorant, brethren, concerning them which are asleep, that ye sorrow not, even as others which have no hope. For if we believe that Jesus died and rose again, even so them also which sleep in Jesus will God bring with him.” Llewellyn was preceded in death by her parents, her husband Leon, 4 brothers, and 6 sisters. Those remaining who loved her are her daughter, Karen and husband Steve Hagan; grandchildren Jeremy (Rachel) Hagan, Karie (William) Hall, Amy (Charlie) Valentine, and Josh (Malisha) Hagan; great grandchildren Emma, Luke, Adam, Destiny, Kaya, Andrew, Benjamin, Jacob, Ava, Abigail, Adelyn, Noah, Sophia, Ella, Aria, and Cora; sisters Joyce Bond and Margaret Laroe, brothers James and Charles Melville and many nieces, nephews, and friends. Private Graveside Services at Petit Jean Cemetery with Bro. John Chapman officiating.

Llewellyn (Melville) Gasaway, the 8th of 15 children, was born to Leon and Maybelle (Segers) Melville October 3, 1930 in Brookhaven, MS. She attended school in Louisiana where she was involved in basketball and drama club. On February 4, 1950... View Obituary & Service Information

The family of Llewellyn Gasaway created this Life Tributes page to make it easy to share your memories.

Llewellyn (Melville) Gasaway, the 8th of 15 children, was born...

Send flowers to the Gasaway family.