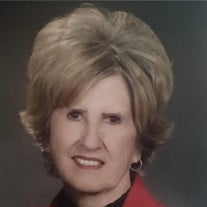 Letha Marie Deaver Jackson Brown left this world and entered her eternal home on Friday, September 4, 2020. She was eighty. She was born in Plumerville, AR to Burl and Mildred Deaver on May 13, 1940. She was a childhood polio survivor, but she never let it slow her down. She was a 1958 graduate of Plumerville High School where she was a starting basketball player. In 1958, she married Clarence Reese Jackson, and they were blessed with three children: Eddie, Tim, and Melissa. They made their home in Pine Bluff. Clarence tragically passed away in 1973, leaving Letha a widow. She married Pastor WIlliam Raymond (Bill) Brown in 1975, joining their families for a combined total of seven children. They made their home in Jacksonville, AR, and later Morrilton, AR, where she lived until her death. Letha was a wonderful wife, mother, and grandmother. She had a zest for life and loved to camp, water ski, and travel. She had an incredibly sharp wit and although she was quiet, she had a great sense of humor. She loved big family gatherings, where she always prepared a large spread of delicious food. She adored babies and children: she worked for years at the Bayou Meto Baptist Daycare in Jacksonville, and taught countless children in her four and five year old Sunday school class at First Baptist Morrilton. As a lifelong homemaker, Letha exemplified the Apostle Paul’s command to “live quietly and work with your hands.” She served her family selflessly with joy and excellence. Her life was comprised of countless small deeds that made all the difference to her family: sitting on the floor working puzzles with a grandchild, rising early to make delicious homemade bread, preparing a meal, and making her home a place where people felt loved and welcomed. Letha was preceded in death by her parents, Burl and Mildred Deaver, husband Clarence Reese Jackson, and husband William Raymond (Bill) Brown. She is survived by her children, Karen Brown Ratliff of Jacksonville, Eddie Jackson (Jennifer) of Nixa, MO, David Brown (Denise) of McGehee, Linnea Brown Udochi (Ben) of Conway, Tim Jackson of Morrilton, William “Ray” Brown of Centerton, and Melissa Jackson Hayes (Roger) of Morrilton, brother Billy Farrell Deaver of Plumerville, sister Margaret Tiner of Plumerville, twenty-two grandchildren, twenty-two great-grandchildren, and one great-great-grandchild. Funeral services will be held at 2pm on Tuesday, September 8, at First Baptist Church Plumerville, at 303 West Church Street with pastors David Brown, Wesley Brown, and Gavin Roberts officiating. Interment will be at Elmwood Cemetery in Morrilton. A visitation will be held at the church on Monday from 6pm-8pm. Pallbearers are Austin Brown, Andrew Brown, Reese Heidenreich, Grahm Heidenreich, Carter Jackson, Paul Twitty, Graham Ratliff, and KayCee Robinson. Special thanks to Hospice of Central Arkansas, Margaret Tiner, Alyssa Knapp, Susan Salard, Laura Hartsell, and Jackie Labarbara. Online guestbook: www.harrisfuneralhomes.net

Letha Marie Deaver Jackson Brown left this world and entered her eternal home on Friday, September 4, 2020. She was eighty. She was born in Plumerville, AR to Burl and Mildred Deaver on May 13, 1940. She was a childhood polio survivor, but she... View Obituary & Service Information

The family of Letha Marie Deaver Jackson Brown created this Life Tributes page to make it easy to share your memories.