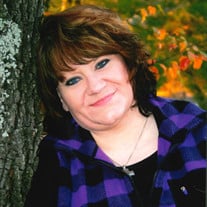 Julie Jana Scroggins-Bingham, 47, of Morrilton entered her heavenly home on Friday, September 24, 2021. She was born January 20, 1974 in Morrilton, the daughter of Nova Caldwell Scroggins and the late Jim Scroggins. Grandparents were the late Ed and Glenna Ragsdale Caldwell and Herbert and Nellie Polk Scroggins. Julie was a graduate of Morrilton High School, class of 1992, attended Arkansas Tech University, a member of Bethel Missionary Baptist Church since 1989, and was a preschool teacher as long as her health permitted. Julie and Jeremy Bingham were married for 22 years. They attended Bethel Church, worked with youth in early years of their marriage, enjoyed working in Vacation Bible School, BTC Secretary, and presently organized and served on security team at the church. One of her favorites was teaching a primary Sunday School Class when she was a teenager. One of Julie’s favorite hobbies was spending time on the family farm in Shirley, Arkansas riding her four-wheeler and visiting in the neighborhood. Julie loved animals and spent lots of time working with animals, she enjoyed short trips to Mountain View and other places in Arkansas. Julie loved holidays, and helping her mother decorate for each holiday, Thanksgiving being her favorite. Julie was preceded in death by her father, grandparents, special aunt: Addie Scroggins McCoy; and uncle: Junior, uncle Perry Collins, mother and father-in-law Marilyn and David Bingham, cousins Harold and Josh McCoy. Other than her husband and mother, survivors include: brother and sister-in-law: Tim and Rita Bingham; niece: Haley Morgan (Patrick) and baby Jo; niece: Lindsay Bingham; nephew: Matthew Bingham; uncle and aunt: David and Janie Scroggins; uncle: Willie Jay Scroggins; aunt: Betty Scroggins Collins; cousins: Donald McCoy, James McCoy, Shannon Scroggins (Teresa) Terri Nelson (Michael), Jeff Scroggins (Misty) and their family members. Julie touched many lives and is also survived by a host of special friends and classmates. Many who stood by her and encouraged her during last few years of struggles. Funeral service will be 3:00p.m. Tuesday, September 28, 2021 at Bethel Missionary Baptist Church. Burial will be at Pleasant Hill Cemetery in Center Ridge. Family will receive friends one hour prior to the funeral at the church.

Julie Jana Scroggins-Bingham, 47, of Morrilton entered her heavenly home on Friday, September 24, 2021. She was born January 20, 1974 in Morrilton, the daughter of Nova Caldwell Scroggins and the late Jim Scroggins. Grandparents were the late... View Obituary & Service Information

The family of Julie Jana Scroggins-Bingham created this Life Tributes page to make it easy to share your memories.

Send flowers to the Scroggins-Bingham family.