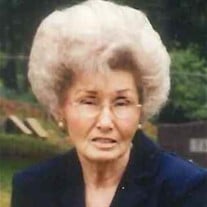 Juanita Lee Chism, age 88, of Houston, Arkansas, passed away Thursday, August 1, 2019. She was born August 27, 1930 in Houston, Arkansas, the daughter of Ezra McGlothlin and Martha Hightower McGlothlin. She was the widow of Bernard Chism after 69 years of marriage. Juanita was a former machine operator at Crompton Mills and a member of Houston First Assembly of God. She is survived by her son, Carroll Chism and wife, Kelley of Morrilton; granddaughters, Whitney Force and husband, Andy of Solgohachia and Angela Stafford of Morrilton; great grandchildren, Chloe, Cami, and Daxton Force and Emily and Abigail Stafford; siblings, Mary Maddox of Houston, Essie May and husband, Glen of Houston, William McGlothlin and wife, Pat of Marked Tree, and Jannie Adams of Sherwood. Other than her parents and husband, she was preceded in death by her sister, Lovean Harris; son, Denard Chism; and two infant daughters. Funeral services will be 10:00 a.m. Monday, August 5, at the Harris Chapel with Bro. Buddy Wroten and Bro. Steven Schlinker officiating. Burial will be at May Cemetery by Harris Funeral Home of Morrilton. The family will receive friends from 2:00 to 4:00 p.m. Sunday, at the funeral home. Juanita’s family would like to thank Heritage for their care over the last few months and a special thanks to Jason Young.

The family of Juanita Lee Chism created this Life Tributes page to make it easy to share your memories.

Send flowers to the Chism family.