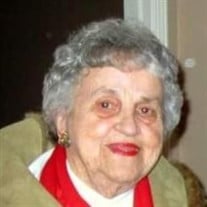 If ever there was a treasure and an icon in this world, we lost one on February 15, 2021. Joye Bernice “Miss Bernie” Beeson was born in Little Rock, Arkansas on July 24, 1927 to Nick and Gladys (McGowan) Holloway. She graduated from Little Rock High School (now Little Rock Central) where she was well-known for her outgoing personality and dancing at Robinson Auditorium. After graduating high school, she attended Arkansas Tech to attain her Associate’s Teaching degree. It was here that she saw a young, blonde-haired country boy in the student center and wanted to meet him so badly, she yelled out, “Hey, Blondie!” He promptly told her where to go, but as fate would have it, the two did get together and soon fell in love. On December 22, 1946 she married O. V. Beeson and soon moved with him to Hattieville, Arkansas where the “city girl” who was used to weekly hair appointments and manicures began life in the country learning that potatoes grow underground and the best way to cool off in summer is with a swim in the creek. Having left her teaching position at David O. Dodd Elementary in Little Rock, she became one of the three teachers at the three-room Hattieville Elementary with Mrs. Etta Peck and Mrs. Audley Williams. This was the beginning of over 30 years of teaching grade schoolers in northern Conway County and changing the lives of every student who passed through her classroom. Early in her career, she attained her Bachelor’s Degree from Arkansas State Teachers College (now University of Central Arkansas.) She spent seven years teaching at Nemo Vista Elementary and the remaining 16 years at Wonderview Elementary, retiring in 1987 after having taught four family generations of students in some of her classes. After her retirement, she continued helping the education of local children by tutoring them in her home for another 20 years. Her career also included working at the Conway County Welfare Office, along with working in the couple’s store, O. V. Beeson General Merchandise (now Beeson’s Grocery) in Hattieville, helping on the cattle farm, keeping house, and taking food and water to O. V. when he was fighting fire for the National Forest Service. She also served as a volunteer with St. Vincent Morrilton Hospital, CASA, Conway County Library, and other local civic programs. In addition, she was a member of Arkansas Retired Teachers Association, Pathfinders Club, Friends of the Conway County Library, Conway County Extension Homemakers, and numerous other organizations. A strong Methodist, she was a member of Pulaski Heights Methodist in Little Rock, Morrilton Methodist, and finally Plumerville Methodist Churches. One of her fondest activities was her annual “Miss Bernie’s Easter Egg Hunt” which her daughter and she started with a small family gathering that has grown to over 100 participants in the last few years including kids who participated bringing their kids and grandkids. This kept her active and in touch with the children she loved so much. Her activities also included entertainment as a part of an all-female barber shop quartet in Hattieville in the late 1950s and early 1960s performing with Audley Williams, Dorothy (Dot) Brents, and Rena Stout in various venues in the area including a competition in Hot Springs, Arkansas. But she is best known for her “Minnie Pearl” act that played on the character created by Sarah Cannon telling jokes with her flower emblazoned hat with the price tag hanging from the side and a boisterous “HOW-DEE! I’m just so proud to be here!” She performed for various civic organizations, hospitals, churches, and nursing homes while never taking a dime in payment. While she never got to meet her Grand Ol’ Opry and Hee Haw idol a trip through Nashville was not complete without a stop at the late entertainer’s residence for a photograph and to pay homage. She left an impression on everyone she met with her infectious laugh and upbeat tone. She never met anyone she did not like and treated everyone the same regardless of their background or status. She was always willing to lend an ear and left everyone with a smile on their face and the joy of having met such a woman. Everyone loved “Miss Bernie.” She is proceeded in death by her parents, husband, step-great-grandson Zachary Bragg, son-in-law Danny Mourot, and her brother Nick Holloway, Jr. She is survived by her children Nicki Jean Beeson Mourot of Hattieville and Terry Virgil Beeson (Cindy) of Springfield, Missouri, 6 grandchildren, 11 great-grandchildren, 17 great-great-grandchildren, numerous nieces and nephews, and hundreds of those who were part of her classroom over the years who she considered her “children” plus a wealth of friends. The family has no immediate plans for services due to COVID and weather restrictions but will have a public celebration of her life July 24th of this year on what would have been her 94th birthday. All her friends, family, and “children” are encouraged to attend and say a fond farewell to “Miss Bernie.” The family wishes to thank all the people who helped during her last few years, especially Glenna Schmidt and Jen Reid. The family requests no flowers, but rather donations in her honor to Plumerville Methodist Church or Conway County Library.

The family of Mrs. Joye Bernice "Miss Bernie" Beeson created this Life Tributes page to make it easy to share your memories.

If ever there was a treasure and an icon in this world, we lost...

Send flowers to the Beeson family.