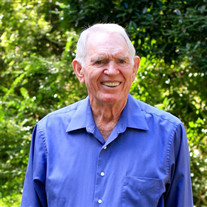 John Edmon Parks, Jr., 80, of Solgohachia, AR escaped the confines of mortality on June 1, 2019. Mr. Parks entered this world on September 22,1938 in Atkins, AR as the mischievous second child of John Sr. and Eunice Lavada Crawford Parks. He relieved the administration of Morrilton High School by graduating in 1956 and became the responsibility of the Marine Corp. After many antics, much education, and the occasional opportunity, Private Parks left the service. He met his dedicated wife of 59 years, Reena Bundy Parks in Las Vegas, Nevada where they celebrated New Year's Day by getting married in 1960. He eventually attained a plot of rocky land and realized his dream of being an enthusiastic hillside farmer. Despite his love for chickens, cattle, and gardening, his greatest achievements were his children and grandchildren. In addition to his wife, Mr. Parks is preserved through love by his children Carl (Gaye) Parks of St. Elizabeth, Michael (Josie) Parks of California, Larry Parks (Evelyn Conaway) of Solgohachia and Patricia (John) Hopkins of Solgohachia and fourteen beloved grandchildren and nine great-grandchildren. He is also held in the hearts of his two brothers and four sisters. Mr. Parks was preceded in death by his parents and by his grandson, Jared. Funeral services will be 2:00 p.m. Tuesday, June 4, at the Harris Chapel with Rev. Dave Parks, Carl Parks, and John Hopkins officiating. Burial will be at Friendship Cemetery by Harris Funeral Home of Morrilton. Pallbearers will be, Carl Parks, Larry Parks, Daniel Parks, Nathan Parks, Brent Parks, Harold Williams, Jr. The family will receive friends from 6:00 to 8:00 p.m. Monday, June 3, at The Church of Jesus Christ Latter Day Saints in Morrilton.

The family of John Edmon Parks Jr. created this Life Tributes page to make it easy to share your memories.

Send flowers to the Parks family.