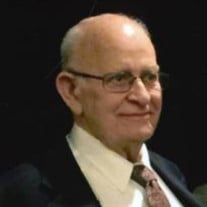 John Carroll Hogan (September 19, 1942 –April 5, 2020) John Carroll Hogan, who resided in Morrilton, Arkansas, passed away April 5, 2020, at his home in Morrilton. He was born September 19, 1942, in Morrilton, Arkansas, to the late Cecil Stanford Hogan and the late Flossie B. (Watts) Hogan. He was 77 years old. John was a retired civil engineer and mathematics instructor. He was a graduate of Morrilton High School and earned a Bachelor of Science in Civil Engineering from the University of Arkansas in Fayetteville and a Masters of Education in Mathematics from Arkansas Tech University in Russellville. His first engineering position was with the U.S. Corps of Engineers in Little Rock. He later worked at Headquarters U.S. Army Europe in Heidelberg, Germany, where he managed construction of military sites in Germany. His last assignment was the dismantling of Fort Chaffee in Fort Smith. He received numerous accolades during his career to include the Meritorious Service Award in 1985 and Employee of the Year in the Little Rock District in 2000. John retired from engineering after 38 years and then spent the next 10 years fulfilling his dream of teaching mathematics at UACCM. In 2006 he received the Who’s Who Award for American Teachers. John was a member of Fish Lake Club and was a faithful member of First Presbyterian Church in Morrilton where he was an elder. The family will gather for a private graveside service. Burial will be at Elmwood Cemetery in Morrilton under the direction of Harris Funeral Home. A memorial service for family and friends of John will take place later in the summer. John is survived by his wife of 57 years, Glennette (Long) Hogan, his three sons: Paul Hogan and wife Tiffany of Morrilton, Scott Hogan and husband Josh, and Brad Hogan and wife Jennifer all of Little Rock. He is also survived by one sister, Jane Qualls of Texarkana, and two brothers: Joe Hogan and wife Gayle of Las Vega, Nevada, and Bob Ed Hogan and wife Carol of Morrilton. He leaves behind twelve grandchildren: Luke Hogan and wife Katie of Siloam Springs and Grant Hogan of Conway; Dylan and John Wyatt Hogan of Little Rock; Vaughn, Emma, Clark, Caroline, and Greta Hogan of Conway; Kasia and Landon Walker and PJ Hogan of Morrilton, several nieces, nephews, and cousins and many friends. Also included in John’s family are the mothers of his older grandchildren Christy Langejans, CC Phillips, and Becky Hogan. John will be sorely missed by all of us who loved him. He was preceded in death by his parents and son John Patrick Hogan. Pallbearers will be grandsons Luke, Grant, Dylan, John Wyatt, Vaughn, and Clark Hogan and Landon Walker. In lieu of flowers, memorial contributions may be made to First Presbyterian Church, 105 West Church, Morrilton, AR 72110.

The family of John Carroll Hogan created this Life Tributes page to make it easy to share your memories.

Send flowers to the Hogan family.