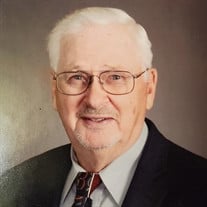 Jerry Wayne Brents, Sr., 75, of Russellville, AR, passed away peacefully at 6:00 p.m. Monday, February 8, 2021. He was born on May 3, 1945, in Cleveland, AR, to Joe Laudis "Bill" Brents and Minnie Mae Henderson Brents. He was a member of Russellville First Assembly of God. He grew up moving with his family across Arkansas, Colorado, Oregon, New Mexico and California. This gave him a deep appreciation for traveling and being outdoors. He settled in Arkansas after meeting the love of his life. He excelled in his profession of managing retail stores and retired from Alco after 47 years of service. Jerry loved spending time with his family who gather often singing karaoke, celebrating birthdays and holidays. He loved watching each one of his grandchildren in their favorite activities. He enjoyed watching baseball and old westerns. Any who knew him would say he always had a smile for everyone. He will always be remembered for his sense of humor and his strong faith. Other than his parents, he was preceded in death by a brother, Jody Brents; a sister, Margean Brents Ralls; a brother-in-law, Gerald Plumlee; a sister-in-law, Lorene Brents. He is survived by his wife of 56 years, Doylene Tyler Brents of Russellville and his children, Gloria (Gary) Ward of Little Rock, AR, Darla (Doug) Rogers of Russellville, AR, Janice (Russell) Brandenburg of Taylor, AR, Jerry W. (Holly) Brents, Jr. of Danville, AR; and two sisters, Faye Plumlee of Greenbrier, AR and Debbie (Raymond) Wells of Wilmar, AR. His much-loved grandchildren are Alexia Elichiry of Little Rock, AR, Devin (Breanne) Rogers of Van Buren, AR, Tess (Jeff) Hicks of Russellville, AR, Paige (John) Burt of Little Rock, AR, Brice Ward of Durango, CO, Mason (Kerry) Smith of Boston, MA, Matt (Tierney) Russell of Little Rock, AR, Porscha (Kyle) Coffman of Knoxville, TN, Adaline Grace Brents of Danville, AR, Jaxson Laudis Brents of Danville, AR, and Sage “Sam” Ward of Little Rock, AR. His adored great-grandchildren are Kota "Bear" Shipley, Skyler Hicks, Brently Hicks, James Burt, Jace Russell, Avery Rogers, and soon to be Bennett Russell and Addison Rogers, as well as many other beloved family members. Funeral service will be 2:00 p.m. Friday, February 12, at Harris Chapel with Rev. Kyle Coffman officiating. Due to Covid-19 restrictions with limited seating, family is encouraging friends to join them at visitation and at the gravesite committal. Burial will be at Brents Cemetery. The family will receive friends from 6:00 to 8:00 p.m. Thursday, February 11th, at the funeral home. Pallbearers are his grandsons and grandson-in-laws Devin Rogers, Mason Smith, Matt Russell, Kyle Coffman, Jaxson Brents, and Jeff Hicks.

Jerry Wayne Brents, Sr., 75, of Russellville, AR, passed away peacefully at 6:00 p.m. Monday, February 8, 2021. He was born on May 3, 1945, in Cleveland, AR, to Joe Laudis "Bill" Brents and Minnie Mae Henderson Brents. He was a member of Russellville... View Obituary & Service Information

The family of Jerry Wayne Brents created this Life Tributes page to make it easy to share your memories.

Send flowers to the Brents family.