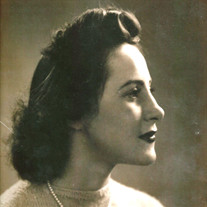 Jean Bateman Walt Stallings, age 99, of Morrilton, Arkansas, passed away Sunday, January 5, 2020. She was born February 29, 1920 in Little Rock, Arkansas, a daughter of James Riggs Walt and Myrtle Mathews Walt. She was a most devoted wife to Alan Eugene Stallings, Sr. for 59 years. She attended Hendrix College and graduated from University of Arkansas with a BA in English and Latin. She was a member of the First Presbyterian Church in Morrilton. She was the Organizing Regent of the General William Lewis Chapter of the DAR in Morrilton. She also belonged to The Daughters of the Republic of Texas, The National Society of the Colonial Dames of America, The Jamestowne Society, and The National Society Magna Charta Dames and Barons. Jean created beautiful works of handmade needlepoint and quilts. She loved art of all styles and mediums and was an avid collector of antiques. Jean was active in the lives of her grandchildren and encouraged in them an appreciation for nature, music, and art. She will be remembered fondly and with love. She is survived by her sons, Alan (Carrie Ann) Stallings, Jr. of Jackson, Mississippi and Walt Stallings of Little Rock; grandchildren, Fran (Mike) Peacock of Clinton, Mississippi, Ann Walt Stallings Tagliamonte (John) of Boston, Massachusetts, Hammans (Shelly) Stallings of Austin, Texas, and Taylor (Ashley) Stallings of Bellaire, Texas; great grandchildren, Avery Dale Peacock, Riggs Michael Peacock, John Robert Stallings, and Georgina Stallings; brother, Jesse (Katy) Page Walt of Altheimer, Arkansas; and numerous nieces and nephews. Other than her parents and husband, she was preceded in death by a brother, Dr. James Riggs Walt and grandson, Alan Eugene Stallings, III. Graveside memorial service will be 2:00 p.m. Friday, January 10, 2020, at Elmwood Cemetery with Rev. J.D. Walt officiating. In lieu of flowers, the family requests that memorials be made to The Alzheimer’s Association at 225 N. Michigan Ave., Fl. 17, Chicago, IL 60601 act.alz.org.

Jean Bateman Walt Stallings, age 99, of Morrilton, Arkansas, passed away Sunday, January 5, 2020. She was born February 29, 1920 in Little Rock, Arkansas, a daughter of James Riggs Walt and Myrtle Mathews Walt. She was a most devoted wife to... View Obituary & Service Information

The family of Jean Bateman Walt Stallings created this Life Tributes page to make it easy to share your memories.

Send flowers to the Stallings family.