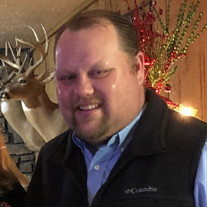 Jason Andrew Cowan, age 40, of Morrilton, passed away Friday, December 20, 2019. He was born July 13, 1979 in Morrilton. He was an process leader electrician and a member of First Freewill Baptist Church of Morrilton. He was an amazing husband, father, brother, son, and friend. He loved watching his daughters play softball, his son playing football, enjoyed hunting and fishing, and put his wife and kids first in everything he did. They were his world and he theirs. Jason and Dalaina were High School sweethearts who married young. They were married March 17, 2001 and enjoyed over 18 years of marriage and 20 years together. They had three beautiful children: Madison, Paisley, and Parker. Jason’s greatest joy was teaching his children whether it was the right way to hit a softball, hunting or fishing tricks, and how to raise chickens. He had the biggest heart for his friends and family; and was always the first to go help move a deer stand, help fix something, or help you eat dinner. He was an amazing man to know, love, and laugh with him. He was always cutting up and smarting off. He will be greatly missed by so many. Survivors include his wife: Dalaina Etheridge Cowan; children: Madison, Paisley, and Parker Cowan; parents: Michael A. (Kay) Cowan and Carol E. Henley Sawyer; brother: Daren (Sandra) Mitchell of Plumerville; sister: Stacy (Shawn) Pate of Perryville; step-sister: Krissy Payne of Scotland; aunt: Jo-Ellyn Mayfield; and a host of nieces and nephews. He was preceded in death by grandparents: William H. “Bill” Cowan, Troy and Joy Faye Henley, and R.J. and Shirley Jean Williams. Funeral service will be 2:00 p.m. Friday, December 27, at Harris Chapel with Bro. Mickey Glover and Bro. Danny Ward officiating. Burial will be at Plummerville Cemetery. Family will receive friends 6:00-8:00 p.m. Thursday, December 26, at the funeral home.

The family of Jason Andrew Cowan created this Life Tributes page to make it easy to share your memories.

Send flowers to the Cowan family.