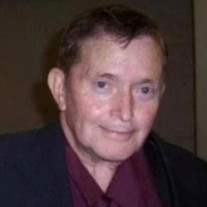 James Richard Ridling, 81 of Atkins, passed away peacefully on July 15, 2021, in Hot Springs. He was born on March 19, 1940, in Robertstown to Jettie Ray “Massey” Ridling and James Erby Ridling. He grew up in Robertstown where he enjoyed fishing and hunting rabbits, squirrels, and quail. He attended Wonderview School during his early years and later graduated from Morrilton High School in 1957. His first job was a night guard at Compton Mill when he was 16 years old, and he later become a full-time employee. He retired from Conagra after 34 years of employment. He enjoyed being a Ham Radio operator, attending local and state meetings and talking weekly on his radios with his son, Jeffrey. He also enjoyed painting scenery. In 1962 he married Carol Hays from Atkins. They lived in Morrilton for eight years before moving to Atkins where he resided the remainder of his life. James and Carol had three daughters: Tannya and Rick Pennington of Hot Springs; Nancy Ridling of Fairfield Bay; and Sara Penny and Bill Traffanstedt of Atkins; and a son, Jeffrey Ridling of Atkins. James was preceded in death by his parents, sisters Shelby Kent and Laura Ridling, grandson, William James Webb, paternal grandparents James Franklin and Laura “Roberts” Ridling, and maternal grandparents Perry Richard Massey and Laurie E. “Andrews” Massey. He is survived by his wife of 59 years and his children. He is also survived by grandsons Derek Webb of Denver, Colorado; Dustin and Destiny Ridling of Broken Arrow, Oklahoma; David and Nikki Ridling of Dardanelle; Ryan Pennington of Beebe; and Dr. John Pennington of Memphis, Tennessee; granddaughters: Cheristy Backer and Kort Bosley of Dover; Randi Schutt of Atkins; Staci Webb and Traci Webb of Nashville, Tennessee; Erica Schutt Traffanstedt and Teagan Martin of New Port; and Julie Pennington of Justin, Texas; great-grandchildren: Ivy Sutterfield, Tyler and Ally Backer, all of Atkins; Kynlee MacIsaac of New Port; and Avery Burman of Dardanelle; sister-in-law Gaynell and David Staggs of Appleton; brother-in-law Jamie and Gladys Hays of Bethesda, Maryland; and several nieces, nephews, and cousins. A graveside service at Bells Chapel Cemetery in Atkins will be held at 10 a.m. on Sunday, August 1, 2021.

The family of James Richard Ridling created this Life Tributes page to make it easy to share your memories.

James Richard Ridling, 81 of Atkins, passed away peacefully on...

Send flowers to the Ridling family.