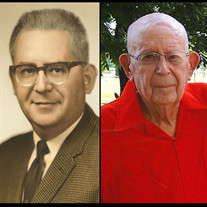 James Bartlett, age 91, of Jerusalem, Arkansas, passed away Wednesday, June 3rd, 2020. He was born August 1, 1928 at Dover, Arkansas (Pope County). He was the oldest of three children born to Covey D. and Pauline Tuck Bartlett. Raised at Appleton and attended grade school there, graduating from Hector High School in 1946. James worked for International Shoe Company at Russellville until he was called into service. After service for two years in the Army, he returned to work at International Shoe Co. In 1953, he married Wynona Spears on June 12th and this year would be the 67th year anniversary. Wynona convinced him to quit his job at the shoe factory and go to college. James graduated from Arkansas Tech University (Arkansas Tech College at that time) in 1958. He worked for Goodyear Tire for a short time in Fort Smith, Memphis and El Dorado. James started working for Arkansas State Highway Department on April 1, 1960 and retired January 1st, 1988 as Chief of the Right-of-Way Department. He was known at the Highway Dept. as “Jim.” He was a faithful member of the Church of Christ and taught Bible classes for many years. When he and Wynona retired, they moved back to Jerusalem (Wynona’s home place) and begin to enjoy this time by traveling. Their first trip was to Australia, New Zealand and Fiji. They made 34 trips across the oceans and enjoyed all continents accepts the Antarctica area (too cold to go there for them). They chose the trips that were 28 to 31 days, giving time to really enjoy the areas. They never went on one of these trips that they didn’t enjoy and made many friends. After the trips across the oceans, they toured all 50 states and enjoyed these so much. They found nothing can completely erase the beauty and interesting places in the USA. They found that time and age would stop some traveling but enjoyed being at Jerusalem, going to church there and trying to help in the community as much as possible. James needed to go on dialysis due to failing kidneys and on January 5th, 2017, James went on dialysis. This was at home and the machine was used at night instead of going to a dialysis three times each week. He had pneumonia in January of 2020 and was in the hospital for two weeks. This occurred again in February-March, and in April-May. He was on the ventilator five days and this weakened him plus he lost 14 pounds. His heart was weakened and he could not overcome the effects. He is survived by his wife, Wynona Spears Bartlett of Jerusalem; brother, John Bartlett of Russellville; nephew, Bradley Bartlett; niece, Beverly Bartlett Turner; great niece, Josey; and great nephews, Simon, Eli, and Brodey. Other than his parents, he was preceded in death by his sister, Margaret Sue Bartlett. A graveside service will be 10:00 a.m. Saturday, June 6th, at the Cedar Creek Cemetery with Mr. Ted Knight officiating. The couple was known as “the Bartlett pair” when you saw one you always saw the other. In lieu of flowers, memorials may be made to: Jerusalem Church of Christ, P. O. Box 5, Jerusalem, AR 72080 and Cedar Creek Cemetery, P. O. Box 53, Jerusalem, AR 72080.

The family of James Bartlett created this Life Tributes page to make it easy to share your memories.

Customized sympathy cards. Mailed for you.