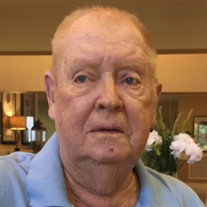 James Thomas Abston, Age 80, of Ada-Valley, AR died on Saturday, September 28, 2019. After 80 years, life, sweet tea, and cigarettes finally kicked his rear. Visitation will be at 6 p.m. on Monday, September 30, 2019 at Harris Funeral Home of Morrilton. A graveside service will be held at 10 am, Tuesday, October 1, 2019 at the Ada-Valley Cemetery with Jason Kendrick and Berry Marshall presiding, burial to follow. J.T. made his last inappropriate comment on September 28, 2019. If you are wondering if you had ever met him, you didn’t—because you WOULD remember. For those of you that did meet him, we apologize, as we’re sure he probably offended you. He was renowned for not holding back and always telling it as he saw it. J.T. was born to James Columbus and Dezzie Hammonds Abston on September 21, 1939. He was the 2nd of six kids and was the self-appointed leader of his younger siblings. J.T. spent his childhood and teen years ordering them around and, in general, tormenting them. He used his siblings as a buffer to avoid trouble. A great example is when he forced George (Turkey), Eula, Peggy, and Betty to drink some of his homemade moonshine that he had concocted as a young teen and by encouraging them to partake, they couldn’t tell on him. His older sister, Alfretta (Polly) had already moved out or she would have been in on the shenanigans as well. He always had something to say, wisdom to share, and he would get in the last word, every time. J.T.’s leadership was reshaped when he joined the U.S. Navy at the young age of 17. This provided for world travels that resulted in bravery, acts of heroism and many interesting stories, but also a few detentions for holding onto his country boy leadership qualities. J.T. dedicated 34 years of his life to the Papermill (Green Bay Packaging) as a Boiler Operator and master liar. He worked with many friends and “a bunch of idiots” – his words not ours. Well, not exactly his words, because that would have included a bunch of swear words. He leaves behind a heck of a lot of stuff that his family doesn’t know what to do with. So, if you’re looking for something relating to sawmills or machinery or things unknown, just ask his family. No need to wait the “customary amount of time,” tomorrow will be just fine. In addition to his stuff, J.T. Abston leaves behind two brilliant children who he was extremely proud of, James “Pug” (Tonia) Abston and Connie (Tim) Cates, both of Ada-Valley. He will be missed by his grandkids that he adored and taught to tell inappropriate jokes: Josh Cates of Perryville, Lindsey Cates (Matt) Hall, Evan Cates, and Katie Abston, all of Ada-Valley. He also had three great-grand girls, Kamdyn, Kentley, and Kollyns that he doted over and fed too much candy hidden in the pocket of his overalls. To his siblings amazement, he was actually able to snag a good woman and hold on to her. He spotted Betty Lacy Abston as she was crossing the road in Plainview, AR in 1963 and they were married a short time later. She was knock dead gorgeous and he was smitten. She was caught up in his crystal-blue eyes and smooth talking. The rest of their love story is history. J.T. will be having a reunion with his mother and father and many aunts, uncles, and cousins that passed before him. Again, being the leader, he beat all his siblings to the punch and left them here on earth, but he will probably be standing at the doors of Heaven waiting to tell them some big stories when they arrive. J.T. never found a rule he couldn’t break, a boundary he couldn’t push, a line he couldn’t cross, a story he couldn’t stretch, or a person that he couldn’t embarrass. He was an expert at anything he attempted, especially at machinery, and he had an ear for music. His quick wit, smart mouth, and big smile carried on in his children, grandchildren, and great-grand girls. Despite his crusty exterior, foul-mouth and stubbornness, he was truly a loving, giving, and caring person. That is evident in the deep sorrow and pain felt in our hearts from his passing. J.T. led a good life full of adventure and had a peaceful death while surrounded by those he loved. He was such a great storyteller, but more so than that, he WAS the story, and man, was he a heck of a story.

The family of James Thomas Abston created this Life Tributes page to make it easy to share your memories.

Send flowers to the Abston family.