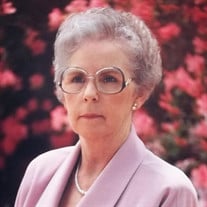 Jackie Cody Pruett, 95, of Pine Bluff, passed away on March 8, 2021 at Jefferson Regional Medical Center. She was born March 9, 1926 in the Rose Creek Community on Petit Jean Mountain. She was the daughter of the late Wilburn and Mittie Robinson Cody. She was preceded in death by her parents, her sister Gladys Cody Chambliss, and by twin infant sons Bobby George and Billy George Pruett, born and died on February 7, 1945. Her grandfather on the Cody side named her ‘Gola’ on her birth certificate, but her nature was a bit ‘tomboyish,’ so her father started calling her ‘Jack,’ after the world famous prize fighter of the era, Jack Dempsey. Later on, one of her school girlfriends decided it was just too masculine, and declared her to be ‘Jackie.’ It stuck, and she remained Jackie for the rest of her life. As a girl, she attended the White Eagle School in the Rose Creek Community, which only went through the eighth grade. She aspired to a high school diploma, but that would have required being taken by bus to the nearest high school, located in Casa. The Rose Creek administration was opposed to bussing any of the students, so Jackie had to further her education later by correspondence, the Modern School of Business, and classes at Arkansas Vocational-Technical School in Pine Bluff. Later, she attended Real Estate courses for sales and property management. She is survived by her husband, George Pruett, her sister Eunice Cody Guiling, and her two daughters, Pamela Pruett Love (Russell), and Kimberly Ann Pruett. She married George Caleb Pruett on August 2, 1944, and they enjoyed a happy lifetime together of 76 years. After the war, George and Jackie later moved to Pine Bluff on March 21, 1951, and were devout members of the Church of Christ. Jackie was active in church work, and taught the little children’s Bible class for many years. Her love of the Church, her family, and her fellow Christians was a priority in her life. She became active in real estate during the 1960s and ‘70s, with George being a broker, and her a sales agent and handling property management. She also enjoyed gardening and working in the yard, and took pride in her home and maintaining her house and appearance in a lovely and professional manner. She was a good cook and hostess, always making people welcome in her home. And, she was an expert seamstress, making many garments for her family, and sewing award-winning homemade quilts. Visitation will be Thursday, March 11, 2021 at Ralph Robinson & Son Funeral Home in Pine Bluff, from 1:00 - 3:00 pm. Funeral services will be 2:00 pm, Friday, March 12, 2021 at the Harris Funeral Home Chapel in Morrilton, Arkansas, with visitation from 1:00 pm until service time. Randall Elrod will officiate. Interment will follow at Old Hickory Cemetery north of Morrilton under the direction of Ralph Robinson & Son.

Jackie Cody Pruett, 95, of Pine Bluff, passed away on March 8, 2021 at Jefferson Regional Medical Center. She was born March 9, 1926 in the Rose Creek Community on Petit Jean Mountain. She was the daughter of the late Wilburn and Mittie Robinson... View Obituary & Service Information

The family of Jackie Cody Pruett created this Life Tributes page to make it easy to share your memories.

Send flowers to the Pruett family.