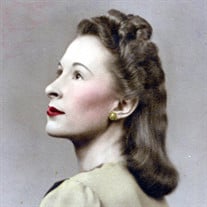 Helen Hawkins of the Harmony Community, near Williams Junction, Perry County, Arkansas died 18 July 2021 from complications of a debilitating stroke. She was preceded in death by her parents Floyd and Gertrude Lloyd and her husband of almost... View Obituary & Service Information

The family of Helen Lloyd Hawkins created this Life Tributes page to make it easy to share your memories.

Helen Hawkins of the Harmony Community, near Williams Junction,...

Send flowers to the Hawkins family.