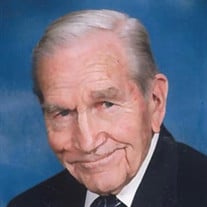 Gordon Earl “Bimbo” Bentley, age 101, of Conway, Arkansas, passed away Tuesday, April 6, 2021. He was born June 22, 1919 in Russellville, Arkansas, a son of George Ellis Bentley and Lalla Hill Bentley. He was the widower of Sara Lee Gordon Bentley after 60 years of marriage. Gordon Earl was a Navy WWII Veteran, a Naval Aviator in the Pacific Theatre, and a Distinguished Flying Cross recipient. He retired from the U.S. Postal Service as a postmaster and was a member of the First United Methodist Church in Morrilton. He graduated from Morrilton High School in 1938 and went to Hendrix College. He was an avid outdoorsman, known for his good nature, sense of humor and love of life. He is survived by his daughter, Lyn Bentley Willis of Houston, Texas; son, George Ellis Bentley of Denver, Colorado; six grandchildren; two great grandchildren; and one great great grandchild. Other than his parents and wife, he was preceded in death by a son, Gordon Earl Bentley, Jr.; grandson, Andrew Bentley Willis; two sisters, Bon Nell Bentley and Margaret Bentley Ellis and two brothers, George Russell Bentley and Robert Hill Bentley. Memorial service will be on his 102nd birthday at 10:00 a.m. Tuesday, June 22, at the First United Methodist Church of Morrilton. A private burial will be at Elmwood Cemetery. Arrangements are by Harris Funeral Home of Morrilton. In lieu of flowers, memorials may be made to First United Methodist Church of Morrilton.

The family of Gordon Earl "Bimbo" Bentley created this Life Tributes page to make it easy to share your memories.

Send flowers to the Bentley family.