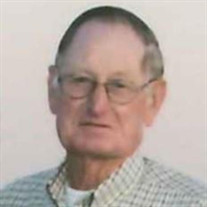 George Franklin Looney, age 81, of Hattieville, AR, went to be with the Lord on Monday, September 20, 2021. He was born on May 27, 1940 to the late Jim and Arkie Mae Bizzell Looney. He was a member of the Hattieville Church of Christ for 51 years and served as song leader there. His occupation of choice was farming. He loved the land, cattle, horses, and dogs. His family and neighbors benefited from his hard-work ethic and his ability to repair anything. George retired from Arkansas Kraft in Morrilton in 2005, after 24 years of service. He loved his grandchildren! His favorite activity was watching their sporting events. Survivors include his loving wife of 57 years, Ruth Ann (Magar) Looney; daughter, Melissa Looney of Ward; son, Rance (Cindy) Looney of Old Hickory; grandchildren, Maddie (Trusten) DeSoto, Macey Jo, and Gage Looney; sister, Shirley (Dale) McGee of Sherwood, AR, and several nieces, nephews, and good friends. He was proceeded in death by his parents, brothers, WT, Leamon, James Looney and sister, Reba Turner. Visitation will be Thursday, September 23rd, from 6-8 pm at Harris Funeral Home in Morrilton. Funeral services will be 10am, Friday, September 24th, at Harris Funeral Chapel with Mr. Bruce Davenport, officiating. Burial will be at Old Hickory Cemetery, in Old Hickory, AR. Pallbearers will be Gage Looney, Kevin Looney, Jarrod DeVore, Josh DeVore, Justin DeVore, and Don DeVore. Honorary pallbearers will be Nelson Looney, Kenny McGee, Toby Torbert, and the Wonderview Class of 1959. The family would like to extend their deepest appreciation to Glenna Schmidt who came into their home and provided loving care to George. Memorials may be made to the Old Hickory Cemetery Fund in care of Annette Williams, 1558 Hwy. 213, Hattieville, AR 72063 or the Alzheimer’s Association, P.O. Box 96011, Washington, D.C. 20090-6011.

George Franklin Looney, age 81, of Hattieville, AR, went to be with the Lord on Monday, September 20, 2021. He was born on May 27, 1940 to the late Jim and Arkie Mae Bizzell Looney. He was a member of the Hattieville Church... View Obituary & Service Information

The family of George Franklin Looney created this Life Tributes page to make it easy to share your memories.

George Franklin Looney, age 81, of Hattieville, AR, went to be...

Send flowers to the Looney family.