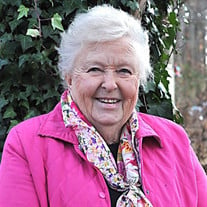 Fern Bess, age 90, of Petit Jean Mountain, Arkansas, passed away Tuesday, August 6, 2019. She was a generous Master Gardener and flower lover that the mountain people know and loved. A transplant from Mississippi, Fern was firmly grounded in the rocky soil of Petit Jean Mountain. She was born in Meridian, Mississippi on February 9, 1929. Her dad worked for the city and her mother was a homemaker with a large garden. Fern says she learned to love plants at her mother’s knee. After high school, Fern went to work in an office in her home town. She was tutoring a mutual friend when she met her husband and love of her life, Bill Bess, as he returned home from the War. They married in 1948 and had three sons, Paul, Jack, and Jimmy. After working in Dallas, TX for nine years, the family bought a farm in Mississippi and moved back to care for her mother. Fern began tutoring students at the Junior College. Bill, aware of her scholarly abilities, registered her for classes. She earned a BS and later a MS in Education from Mississippi State. Fern’s career began when she pursued and obtained teachers training for public schools for the State of Mississippi. She wrote and set up a county wide program for Adult Continuing Education. It was the beginning of an illustrious career in which she traveled from coast to coast teaching workshops for state adult education programs. She and Bill discovered Petit Jean State Park when she traveled to State Teachers College in Conway, Arkansas. It was their 25th wedding anniversary. They fell in love with the mountain and bought their place on Bratcher Road in 1978. After retirement, Fern began another career of volunteerism and support of the State Park and its employees. She lobbied the Legislature to obtain benefits and pay raises for the Park employees. She and Bill worked along with the park staff to plant trees, azaleas and wildflowers to line the walkways. They helped to place the rocks in front of Mather Lodge. Later they bought the brown van, which she still drove, and traveled all over the country planting wild flowers in many state parks. After Bill died in 1994, Fern stayed busy. She became an “official” Master Gardner and began providing gifts of wildflower arrangements for Mather Lodge. She decorated the Christmas tree in the lobby and made and placed Christmas wreaths on all the cabin doors. She regularly made and gave beautiful arrangements for community functions and celebrations. Fern’s accomplishments were not unnoticed at the state level. Governor Mike Huckabee named her “STARkansan” in 1999 for “doing a lot of good for Arkansas without seeking a lot of credit.” He published a wonderful tribute about her volunteerism in his column on the Arkansas web site. In 2001, she was appointed member of the Arkansas Division of Volunteerism Advisory Council. Through the years, Fern served the Petit Jean Mountain community as president of the PJMCA, held every available office in the Extension Homemakers, worked as commissioner of election polls, and was active in the Senior American Special at the Park for thirty-one years. She was always very dedicated to the PJM Cemetery and its needs. She and son Paul grow specimen plants, trees, shrubs, and wildflowers on their property, providing food and a refuge for the birds and wild life. The greenhouses are full of various lush, healthy plants including blooming Christmas cactus, bromeliads and ferns. Fern once said, “the beauty of growing flowers is in the sharing with others.” Those who knew her were often invited to “Come on over, you heifer, I have some cuttings for you that will grow in your yard. She is survived by her sons, Paul Lynn Bess of Petit Jean and Jack Allen Bess of West Coast; granddaughter, Paula Lynn Bess of Rhoda Island; and great granddaughters, Ella and Cassidy. Graveside services will be 10:00 a.m. Monday, August 12, at the Petit Jean Cemetery with Bro. Bill Scroggs officiating.

Fern Bess, age 90, of Petit Jean Mountain, Arkansas, passed away Tuesday, August 6, 2019. She was a generous Master Gardener and flower lover that the mountain people know and loved. A transplant from Mississippi, Fern was firmly grounded in... View Obituary & Service Information

The family of Fern Bess created this Life Tributes page to make it easy to share your memories.

Send flowers to the Bess family.