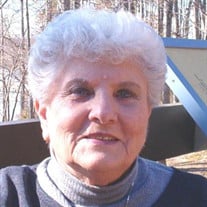 Evelyn Vaught Garrett, age 95, of Perryville, Arkansas, passed away Monday, August 31, 2020. She was born May 6, 1925 in Houston, Arkansas, a daughter of Claude Vaught and Virgie Clayton Vaught. She was a member of Houston Assembly of God Church. Evelyn was born into a farm family near Houston, Arkansas. A middle child, she had 3 older brothers and 3 younger ones, but no sisters. She grew strong and played basketball at the Houston School before graduating. She grew up into quite a lady, raising 5 children, 3 boys and 2 girls, all successful and still living. Evelyn loved her children and their families passionately and was always very family oriented. Later in life, in 1971 she married Al Garrett. They lived near Bigelow and in Perryville for 48 years. Evelyn and Al spent much of their retirement years traveling from state to state in a succession of recreational vehicles, mostly camping with friends and attending conventions of ham radio enthusiasts. Evelyn was creative and talented with her hands. She excelled at a variety of crafts including crocheting and quilting. She became an accomplished oil painter. Evelyn will long be missed by her many friends and family. She is survived by her children, Richard Ussery of Perryville, Jerry (Joanie) Mahan of Greenbrier, John (Tracy) Ussery of Maumelle, Jane Mullins of Perryville, June (Bob Robinson) Gilbert of Perryville, Alfred Garrett, Jr. of Perryville, and Mary (Ronnie) Frey of Bigelow; brothers, Norman Vaught of Perryville and Bob (Joyce) Vaught of Perryville; grandchildren, Brad (Carrie) Tubbs, Alisha Stone, and Lace Mahan (Jordan) Avar; three great grandchildren; and four great great grandchildren. Graveside service will be 2:00 p.m. Thursday, September 3, at May Cemetery with Bro. John Chapman officiating.

Evelyn Vaught Garrett, age 95, of Perryville, Arkansas, passed away Monday, August 31, 2020. She was born May 6, 1925 in Houston, Arkansas, a daughter of Claude Vaught and Virgie Clayton Vaught. She was a member of Houston Assembly of God Church.... View Obituary & Service Information

The family of Evelyn Vaught Garrett created this Life Tributes page to make it easy to share your memories.

Send flowers to the Garrett family.