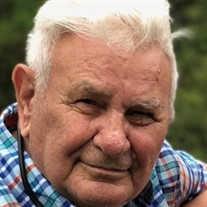 Eugene (Gene) Carl DeSalvo, age 89 of Morrilton passed away peacefully November 19th, 2020, at his home surrounded by his family. He was born November 29th, 1930 at Catholic Point in Center Ridge a son of the late Joseph and Mary DeSalvo. He was a member of a Sacred Heart Catholic Church and of the Knights of Columbus. He was also an Army veteran. He worked for many years at Budweiser and later went on to work for himself, where he and his wife built Pine Acre Kennels. They owned and operated the kennel for 60+ plus years until they retired. He was an avid fisherman, razorback fan, and had a lifelong love of baseball, making homemade wine, sausage, and his famous peanut brittle. He enjoyed putting together puzzles with his kids and grandkids and playing his weekly game of Rook with his wife, sister, and brother-in-law. He was first and foremost a loving husband, daddy and Papa Gene. He was the most tender-hearted man that had an effect on everyone he met and knew. He was survived by his wife of 67 years: Betty Jo DeSalvo; his children: Roxy (Jackie) Harlan, Donnie DeSalvo, Paula (Steve) Bostian, Michelle (Eddie Joe) Poteete, all of Morrilton; five grandchildren: Amber (Danny) Estrada of Little Rock, Heather (Derrick) Poteete, Jamie (Jordan) Bostian, Haley (Daniel) Lynch, and Drew Bostian, all of Morrilton; three great-grandchildren: Dylan Spires of Morrilton, Dennie Joe and Addie Mae Lynch, and Kendrick Newsome; one great-great-grandchild: Olivia Spires; one brother: Richard DeSalvo of Center Ridge; three sisters: Lorene and Irene Dumboski of North Little Rock and Minnie "Tootsie" (Buddy) Hoelzeman of Morrilton; and a host of nieces, nephews and extended family. He was preceded in death by his parents Joseph and Mary DeSalvo; one granddaughter Erika McGee; two sisters Amelia and Julia Paladino; five brothers Paul, Ed, Vince, Bob and Joe Jr DeSalvo. Private Graveside services will be at Oak Grove Cemetery with Father Jack Harris officiating. In lieu of flowers memorial donations may be made to Sacred Heart Catholic Church and Sacred Heart School of Morrilton.

Eugene (Gene) Carl DeSalvo, age 89 of Morrilton passed away peacefully November 19th, 2020, at his home surrounded by his family. He was born November 29th, 1930 at Catholic Point in Center Ridge a son of the late Joseph and... View Obituary & Service Information

The family of Eugene (Gene) Carl DeSalvo created this Life Tributes page to make it easy to share your memories.

Send flowers to the DeSalvo family.