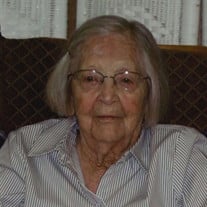 Elizabeth Ann “Lib” Nagel Lanni, age 105, of Center Ridge, passed away on Monday, October 21, 2019. She was born Easter Sunday, April 12, 1914, in the New Dixie Community of Bigelow, Arkansas. She was the first of eight daughters born to the late Nicholas J. and Annie Blount Nagel. She was named Elizabeth Ann, in honor of her grandmother, but would be known as “Lib” or “Libby” throughout her long life. At age 18, Lib left the family home for work in Morrilton providing housekeeping for a family and caring for their handicapped daughter. One day the family asked her if she would like to go with them to the spaghetti dinner at Catholic Point in Center Ridge. She accepted the invitation, and while there, she met John Lanni, a very handsome Italian man. After a courtship, Lib and John married April 10, 1937. They worked hard on their farm, raising cattle, hogs, chickens and always a large garden. John planted and worked the garden and showered his vegetables with love, producing wonderful harvests, while Lib canned and put up their bounty. They were married for 57 years until his illness and death on July 2, 1994. Lib was a devoted Catholic her entire life and parishioner of St. Joseph Catholic Church in Center Ridge, where she attended Mass until age 99, when she suffered a broken hip. She was a member of the Ladies Altar Society and served as Sunshine Lady for many years, where in that ministry, she not only brought sunshine to the sick and homebound, but to many others as well. Lib was preceded in death by her parents, loving husband, and all of her dear sisters and brothers-in law: Josephine & Albert Gottsponer, Margaret & Johnny Rath, Ann & Joe Nahlen, Rosemary & Ed Ruff and Isabelle & Gene Milam, and two sisters who died in infancy, Rita & Agnes Nagel. She is survived by her loving daughter and son-in-law, Pat & Jimmy Flowers of Center Ridge; devoted granddaughters, Denise Flowers & Christie (Steve) Freeman, of Center Ridge; precious great-grandsons, Peyton & Kaleb Freeman, of Center Ridge, who loved their “Granny Lanni” and were the only ones allowed to call her “Granny”. She is also survived by many nieces & nephews. Lib was truly a member of “The Greatest Generation”. She saw many difficult times living through the Great Depression and World War II, while being steadfast while John was away at war and injured. She was the perfect example of the virtues credited to this generation – sacrifice, work ethic, duty and devotion to family. Lib was a gifted seamstress, crafting garments for family and friends througout the county and beyond. She loved gardening and canning and had a green thumb that could grow anything. She was an avid reader who loved to read the newspaper every day as long as she could, even the sports page. She always encouraged her grandchildren to read and pick up a dictionary if they did not understand something. She was very intelligent and knowledgeable. She was a wonderful cook and her granddaughters grew up in her kitchen. She lived a life of faith and integrity and was an inspiration to many. She was hard-working, determined and fiercely independent; a woman of small stature, but of incredible strength. We, her family, have been blessed to have had her love, wisdom and guidance for so many years. She was the root of our family and will be forever missed. Funeral mass will be 10:30 a.m. Thursday, October 24, at St. Joseph Catholic Church with Father T.J. Hart officiating. Burial will be at St. Joseph Cemetery by Harris Funeral Home of Morrilton. Rosary will be at 9:30 a.m. with the visitation following, prior to the mass.

The family of Elizabeth Ann Lanni created this Life Tributes page to make it easy to share your memories.

Send flowers to the Lanni family.