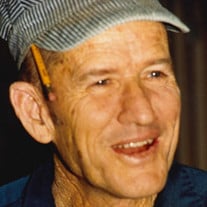 Edward Doyle Taylor, age 98, went home to be with his Lord on October 22, 2020, at RiverChase Rehabilitation and Nursing Facility in Morrilton, Arkansas. He was born January 27, 1922 at Pea Ridge, Atkins, Arkansas, the son of James Andrew and Annie Laura (Goodnight) Taylor. He was preceded in death by his parents, his siblings and a son, Lawrence Edward Taylor. He is survived by his wife of 75 years, Mattie Verlee Taylor; five children, Beth Foster (Ron) of Russellville, Anita Campbell of Hattieville, Johnny Taylor (Evelyn) of White Hall, Debra Halbrook (Wes) of Morrilton, and Thomas Taylor of Sperryville, Virginia; twelve grandchildren, fourteen great-grandchildren, numerous nephews, nieces, and a host of friends who he adored. During World War II, he entered the U.S. Army Air Corps on November 5, 1942 at Camp Joe T. Robinson with rank of Private. In 1943-1945, he served in the Pacific Theatre under General James Macarthur in the 380th Bomb Squad 529th Squadron as a munitions worker. He was honorably discharged on October 24, 1945 at Ft. Bliss, El Paso, Texas with the rank of Sergeant. He was a Baptist and loved his church family at Temple Baptist Church in Perryville. He taught an Adult Sunday School class into his 90’s. He led singing, sang in a quartet, and sang in the choir as long as his health permitted. He was a carpenter and retired from Winrock International as a Master Craftsman. Everyone knew he loved to fish, and at his retirement party, the Winrock staff presented him with a trailer and a boat named The Friendship. As a carpenter, he could build anything from houses to bird houses to toys. He also had a green thumb and liked to grow flowers – the giant varieties especially. He will be sorely missed, but we will meet him again in heaven. Memorials may be made to The Gideons International or Temple Missionary Baptist Church in Perryville. Graveside services will be 2:00 p.m. Friday, October 23, 2020 at Liberty Cemetery in Adona with Bro. Johnny Taylor and Bro. Gordon Morgan officiating. Pallbearers will be Farrell Moore, Doug Watts, Taylor Halbrook, Bart Williams, Jonathan Taylor, and Steve Reid. The family would like to thank the staff of RiverChase Nursing and Rehabilitation Facility in Morrilton, and Kindred Hospice. “And that ye study to be quiet, and to do your own business, and to work with your own hand.” 1 Thessalonians 4:11 Service and arrangements were by Harris Funeral Home of Morrilton.

Edward Doyle Taylor, age 98, went home to be with his Lord on October 22, 2020, at RiverChase Rehabilitation and Nursing Facility in Morrilton, Arkansas. He was born January 27, 1922 at Pea Ridge, Atkins, Arkansas, the son of James Andrew and... View Obituary & Service Information

The family of Edward Doyle Taylor created this Life Tributes page to make it easy to share your memories.

Edward Doyle Taylor, age 98, went home to be with his Lord on...

Send flowers to the Taylor family.