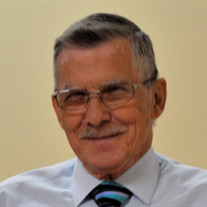 Donald Lynn “Donnie” Brothers, age 74, of Conway, Arkansas, passed away Thursday, December 26, 2019. He was a son of Willis Brothers and Mildred Carter Brothers. Donnie was a lifelong member of the Assemblies of God and attended Perryville First Assembly of God. He was born in Harvey Arkansas on February 8, 1945. His Father became a preacher when Donnie was very young. He lived all over Arkansas as a preacher’s kid. He served in the Arkansas National Guard. He was an officer with the Benton Police Department for seven years. He then began a career in Parts and Service for several dealerships in Central Arkansas. His Father began pastoring at Houston Assembly of God in the late seventies where he met his wife Beverly Cleaver. They later married and Haley Jane was born. She was truly a Daddy’s girl from the beginning. Donnie was an avid sports fan. He rarely missed a game if the Razorbacks, St. Louis Cardinals, or Dallas Cowboys were playing. He loved Southern Gospel music and traveled many miles to see his favorite group The New Hinsons sing. Donnie always joked that he had 3 wives (Cleaver sisters). Beverly was his soulmate and mother to his child. Kimberly was his nurse and shopping buddy. Liesa was his cook. Donnie’s entire world revolved around his precious grandchildren Lynleigh and Logan. They stayed with Pawpaw and Mawmaw every weekend and he insured they were in church every Sunday. He loved them with all his heart. The family would like to thank Dr. Tyrone Lee for taking such good care of Donnie for over 10 years and becoming a friend to him. Donnie made friends everywhere he went. His infectious smile will be missed. He was a special man that will be missed by so many. Donnie loved Jesus and because of this we will see him again one day. Rest in Christ my love. He is survived by his wife, Beverly Cleaver Brothers of Conway; daughter, Haley Brothers(Jon) Stiles of Houston; grandchildren, Lynleigh Stiles and Logan Stiles of Houston; sisters-in-law, Kim Fuller of Houston and Liesa (Jerry) Johnson of Houston; brother-in-law, Richard (Andrea) Cleaver of Mayflower; and many nieces, nephews, and friends. Other than his parents, he was preceded in death by his brothers, Douglas Brothers and Dalton Brothers; and sister, Delores Cain. Funeral services will be 10:00 a.m. Tuesday, December 31, at the Houston Assembly of God with Bro. John Chapman and Bro. Rocky Shelton officiating. Burial will be at May Cemetery by Harris Funeral Home of Morrilton. The family will receive friends from 6:00 to 8:00 p.m. Monday, at the funeral home.

Donald Lynn &#8220;Donnie&#8221; Brothers, age 74, of Conway, Arkansas, passed away Thursday, December 26, 2019. He was a son of Willis Brothers and Mildred Carter Brothers. Donnie was a lifelong member of the Assemblies of God and attended... View Obituary & Service Information

The family of Donald Lynn "Donnie" Brothers created this Life Tributes page to make it easy to share your memories.

Send flowers to the Brothers family.