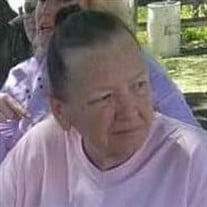 Debra Kay Jones Peoples, age 62, of Morrilton, Arkansas, passed away Tuesday, July 2, 2019. She was born October 16, 1956 in Morrilton, Arkansas, a daughter of Carl Ray Jones and Nora Andrews Jones. Debra was the widow of Donnie Parker. She was an assembly line worker for a manufacturing company and was of the Baptist faith. She is survived by her three daughters, Amy Sane of Morrilton, Stacy Denson of Clarksville and Lacey Peoples of Morrilton; three sons, Tim Peoples of Morrilton, Kasey Peoples of Greenbrier and James Parker of Conway; father Carl Ray Jones of Romance, Arkansas; two sisters, Sharon Faulk of Romance, Arkansas and Barbara Clark of Russellville; one brother, Charles Rushing of Russellville; twenty grandchildren; seven great grandchildren; and many adopted grandchildren. Other than her mother and husband, she was preceded in death by her step father, Jimmy Rushing; brothers, Wayne Jones and Jimmy Rushing, Jr.; and grandsons, Brian Peoples and Yankee Ledbetter. Memorial graveside services will be 10:00 a.m. Saturday, July 6, at Wolf Cemetery in Oppelo. Arrangements are by Harris Funeral Home of Morrilton.

The family of Debra Kay Peoples created this Life Tributes page to make it easy to share your memories.

Send flowers to the Peoples family.