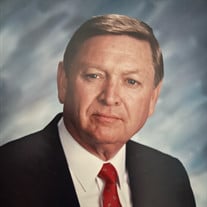 Dr. Dalton Ham of Nixa, Missouri received his eternal reward on April 21st, 2022, at the age of 84, surrounded by family and friends. Dr. Ham was a retired school superintendent and a faithful member of Southgate Baptist Church. He was born July 28th, 1937, at his home in Jasper, Arkansas, to Rual Custar and Goldie Nina (Burdine) Ham. Undoubtedly, he was welcomed home by his Savior saying, “well done my good and faithful servant.” Other than his relationship with Christ, nothing was more important to him than his family. He is survived by his wife of 60 years, Donna Marie (Garrett) Ham of Nixa, Missouri; children Richard Ham and wife Michelle of Bentonville, Arkansas; Jennifer Jackson and husband Eddie of Nixa; and Brian Ham of Chicago, Illinois; grandchildren Garrett, Stephanie, Carter, Lauren, Sabrina, and Ethan and six great-grandchildren Sophia, Kaylin, Ainsley, Trey, Magnolia, and Winnie. He was preceded in death by his parents, brothers Dennis Ham (infant), Carl Ham, and sister Meredith Whitson. He received no greater joy than sharing stories with them and hearing of their exploits as well as vacationing, golfing, and spending time with them. He was a lifelong Baptist, serving as a deacon, gifted Sunday school teacher and innumerable committee leadership positions. He served on the board for Missouri Baptist’s Windemere Retreat and Conference center, Missouri Baptist University, and Missouri Baptist Convention. He never tired of serving and made it his mission to help further the gospel in any way possible. A lifelong educator and master storyteller, Dr. Ham retired as a superintendent at School of the Osage. He started his career as a teacher in Deer and Plumerville, Arkansas. Education was “in his genes.” His father was a county superintendent and his mother a schoolteacher. Although he lost his father when he was only 16, his impact lasted his entire life and clearly guided his priorities. After marrying, he took his new bride to pursue opportunities in Kansas City, Missouri, where he was a teacher and principal. He left education to work for Sears Roebuck and as an insurance agent in Kansas City where he was very successful. After a few years, however, he was pulled back to his life-long vocational calling of teaching and mentoring. Dr. Ham served as the superintendent in Purdy, Ava, East Newton, and School of the Osage. He built life-long friendships at each district. He was a “superintendent’s superintendent,” garnering numerous awards for his work in education. He served on numerous professional boards including the Missouri Association of School Administrators (MASA), and the Missouri State Retirement System. In 1986, he received the Outstanding Educator Award from MASA for his work to improve standards in education. In 1994, he was MASA Superintendent of the Year for the State of Missouri. He was a recognized expert in school affairs, often called upon to help craft laws to improve education in Missouri. Perhaps one of his most prized distinctions was an award given to him by teachers at School of the Osage when he retired. Some of the accolades included,” always has students’ best interest at heart…compassionate…remarkable knowledge…trusted advisor…skilled diplomat…a true Christian” and innumerable laudatory comments about his character. Even after retirement, he passed the series 6 and 7 exams and worked as a financial consultant helping Missouri schools maximize their investments. As with all his endeavors, he was extremely effective, becoming the #1 Producer for Cadre Securities in 2001. He maintained lifelong relationships with other retired superintendents and administrators. Of all his accomplishments, Dr. Ham was most proud of his family. He made his children’s spiritual development a priority and often used his quick wit and oratory skills to teach important scriptural precepts to them. When reflecting on his impact, his children, grandchildren, and great-grandchildren will quickly relate a song, a story, a joke, or a one-liner that he used as a launching point to capture teachable moments. He celebrated his family’s success, making sure to tell everyone he met how proud he was of them. Dr. Ham truly never met a stranger. He was gifted with an extraordinary memory for people’s names and faces, often recognizing someone he hadn’t seen for decades, asking them about their spouse and children by name. He could relate to anyone from any station and was keenly interested in their welfare and what was going on with them. Former students frequently relate interacting with him during a difficult period and how his interaction changed their direction. Even while in the hospital, he would ask people caring for him. “Where did you go to school and who was your principal and superintendent?”. A graveside service will be held at 2:00 pm on April 27th, 2022, at the Plumerville Cemetery (Plumerville, Arkansas). A visitation will be held on April 30th, 2022, at 1:00 pm, followed by a memorial service at 2:00 pm at Southgate Baptist Church in Springfield, Missouri. If you should choose to donate to an organization in lieu of flowers, please consider the Gideons, the Missouri Baptist Children’s Home or St. Jude’s Children Hospital.

Dr. Dalton Ham of Nixa, Missouri received his eternal reward on April 21st, 2022, at the age of 84, surrounded by family and friends. Dr. Ham was a retired school superintendent and a faithful member of Southgate Baptist Church. He was born... View Obituary & Service Information

The family of Dr. Dalton Ham created this Life Tributes page to make it easy to share your memories.

Send flowers to the Ham family.