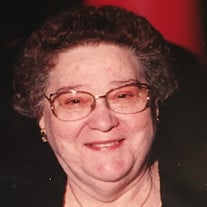 Cora Ann Gray began her life’s journey on January 5, 1934 in Morrilton, Arkansas being born to Hervey and Opal Ethridge. She completed her journey when she went to her Heavenly Father’s home on April 26, 2020. She shared her life with her husband and best friend of 66 (and one half) years; Harold. They lived in many great places while he was serving in the US Air Force. Traveling home and abroad, all the while raising their children and creating their home wherever they might be. Including be a Boy Scout Den Mother and Brownie and Girl Scout Leader! After retiring to Morrilton, Cora Ann attended Petit Jean Technical College of Nursing and proudly graduated at the top of her class! From there she worked many years at the Morrilton Hospital making lifelong friends and administering loving care for her patients. She was an active member of the Church of the Nazarene where she served on the Church Board. She was also the President of the Missionary Society for many years as well as serving on the District Missionary Board. She praised the Lord through her music as an accompanist on the piano; but especially her love, the organ; for the church for 30 plus years. Her beautiful playing will be and is greatly missed. She was also active and traveled with TOPS and SRD while make a multitude of friends along the way. They also loved to cruise, Alaska being their favorite destination. She and Harold served as Devil Dog Band parents (for their children and grandchildren). They also volunteered at T.C. Vaugh Senior Center, Meals on Wheels being one of their special loves. A very well guarded secret is about to be revealed, Cora Ann was the “Secret Santa” for Meals on Wheels in Morrilton. It gave her so much joy that she added other holidays as well! As her health became frail, she turned her talents to crocheting. She would make caps for children at the hospital along with those in need. She stayed true to being a servant of the Lord and a vessel of his ministry. In her last days, she was blessed to have the care and Christian comfort from her granddaughter, Rebecca Crabtree, and her adopted (by love) daughter, Rita Howell. Much love, care and scripture was shared. She was preceded in death by her parents, husband of 66 years, Harold, brother, Tommy Ethridge, sisters-in-law, Eloise Jones, Rita Grabher Gray, Nancy Gray, brother-in-law, Charles Gray. She is survived by her son, Louis E. Gray (Rita), daughters, Deborah Padgett (Austin), Beverly Gray (Perry), son, Stephen L. Gray (Veronica), adopted by love, Mike and Rita Howell, nine grandchildren, eleven great-grandchildren, and five great-great grandchildren. Memorial services will be at a later date. Cora Ann transitioned to her Heavenly Father at 3:00 a.m. on a beautiful Sunday morning. Giving truth to that in fact, “Joy Does come in the Morning.” Thank you for your time reading about our wonderful mother and friend. Arrangements are by Harris Funeral Home of Morrilton. Online guestbook: www.harrisfuneralhomes.net

Cora Ann Gray began her life&#8217;s journey on January 5, 1934 in Morrilton, Arkansas being born to Hervey and Opal Ethridge. She completed her journey when she went to her Heavenly Father&#8217;s home on April 26, 2020. She shared her life... View Obituary & Service Information

The family of Cora Ann Ethridge Gray created this Life Tributes page to make it easy to share your memories.

Send flowers to the Gray family.