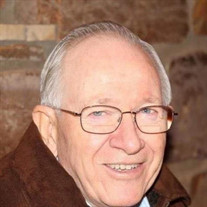 Cleo Young, age 81, of Morrilton, Arkansas, went to be with his Lord and Savior on Wednesday, December 30, 2020. He was born September 20, 1939 in Ada Valley, Arkansas, a son of Elbert S. Young and Jewel Vim Roberts Young. He was a pastor and a member of Mt. View Baptist Church on Wolverton Mountain. He is survived by his wife of 61 years, Betty Gardner Young of Morrilton, four sons, Donnie (Sandy) Young of Perry, Darryl (Laurie) Young of Springdale, David (Amanda) Young of Casa, and Duane (Michelle) Young of Conway, daughter, Carol (Jim) Atkinson of Conway; nine grandchildren; seven great grandchildren; a sister-in-law, Ulalah Young, and a host of nieces and nephews. Other than his parents, he was preceded in death by his brothers, Elmo Young, Othell Young, and Fred (Vernon) Young; sister, Pauline Young Brown; and granddaughter, Whittany Atkinson. Cleo was a faithful servant of Jesus Christ. He was an ordained minister for the past 31 years. During those years, he served as a pastor at Welcome Home Missionary Baptist Church on Rose Creek, Calvary Baptist Church in Clinton, and Mountain View Baptist Church on Wolverton Mountain. During his life, he was also a faithful member of Riverview Baptist Church for 27 years where he served as song leader, young adult Sunday School teacher, and was also a deacon. Cleo was also a member at Bethel Baptist Church in Morrilton and the First Baptist Church of Oppelo. Cleo served as the principal at Riverview Baptist Christian School for eight years. Cleo loved gospel and bluegrass music and was known for his beautiful singing voice. He was a member of the Riverview Gospel Bluegrass Group for 20 years. He was also a member of the Riverview Men’s Trio at Riverview Baptist Church. Prior to his ordination as a minister, he was employed as a manager trainee at Kress Variety Stores in Monroe, Louisiana, an electrician and supervisor at the Crompton-Arkansas Cotton Mill in Morrilton for 20 years, a maintenance supervisor at Aermotor in Conway, and was also a self-employed licensed electrician. He was a 1957 graduate of Morrilton High School. Cleo loved his family with all of his heart. He had an infectious smile and gave the best hugs. There will be a private funeral and burial at 10:00 a.m. Monday, January 18, with Bro. Mike Atkinson and Bro. Josh Young officiating. A video of the service will be made available to the public at the time of the service. Burial will be at the Ada Valley Cemetery. Pallbearers will be Wesley Atkinson, Lynn Young, David Hill, Mike Joslin, Clint Cody, and Cole Cody. Honorary Pallbearers will be JD Haile, Roger Young, Larry Young, Bob Young, Jerry Brown, Joe Brown, Willie Bob Summers, Jared Joslin, and Elton Cody. In lieu of flowers, donations can be made to The Gideon International for Bibles in his memory. Donations can be mailed to The Gideon International P.O. Box 21 Morrilton, AR 72110.

Cleo Young, age 81, of Morrilton, Arkansas, went to be with his Lord and Savior on Wednesday, December 30, 2020. He was born September 20, 1939 in Ada Valley, Arkansas, a son of Elbert S. Young and Jewel Vim Roberts Young. He was a pastor and... View Obituary & Service Information

The family of Mr. Cleo Young created this Life Tributes page to make it easy to share your memories.

Send flowers to the Young family.