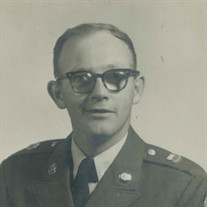 Charles Wayne Wallace, AKA: Charlie, Daddy Rabbit, Scale Gate Charlie, Uncle Lethal, etc., the man who once convinced an entire kindergarten class a “booger monster” in his nose had bitten off his finger, decided it was time to leave for a new adventure. He left this earth just as a rainstorm crept in at 5:37 p.m. Saturday, April 11. He was 82. Wallace, of Atkins, grew up in Perry County, where he learned to be quick with his mind, feet and hands. He once saved one of his sisters from being stopped to death by a stud horse. The key, he said, was to keep the horse angry and focused on him, to keep a tree between himself and the horse, and to give his sister time to escape. He grew up a fighter, joined the Army and became a Golden Gloves boxing champion. Despite his good intentions, Wallace was stubborn and terrible at not questioning orders. He also was terrible at staying silent, which meant he peeled a lot of potatoes, cleaned a lot of latrines and stayed in trouble throughout his service. During this time, he was able to visit France, Ethiopia and somewhere really cold that he never liked. He served in the Army for 11 years and trained soldiers for the Vietnam War. Despite or because of his honest service, he still left the military with Honorable Discharge as Sargent. Wallace and his wife Shirley “Jo” lived in France, Virginia, and Florida before moving back to Arkansas. They lived on a farm in Ada Valley and in a haunted house in Morrilton and then built a log cabin in Atkins. Wallace retired from the paper mill in Morrilton. When he wasn’t at work, he was making flower arrangements with his wife and daughter at Miss Scarlet’s Flower Shop. Wallace not-so-secretly loved flowers and the woods. He taught his daughters and granddaughters the names of all the trees. Wallace was quick with a laugh, a dance and a song. He loved to do a vaguely Irish jig, very similar to a cartoon leprechaun, and recite or sing colorful lyrics, like: “Oh! Yes they call him the streak! He likes to show off his physique.” Another of his favorites was: “I saw a little black bird flying by / he dropped a little whitewash in my eye / I didn’t laugh / I didn’t cry / I just thanked God that cows don’t fly.” He played the piano by ear, despite being hard of hearing, and was always up for spending 10 hour days at blue grass festivals and golf. Like all good Scots, Wallace loved a good story – true or false. Whenever he farted, he claimed it was a “bear on a motorcycle” and asked children to go look. Around town, he signed all his checks as “Ludwig Von Velheim Verfenburger,” and sometimes made up a language when handing the check to the clerk. Wallace is survived by his wife Janelle “Jo” Haralson Wallace, of Atkins; daughters Fidge (Jack) Hickey and Candy Hazel, both of Atkins; sisters Johnny Bailey, Pat Bird and Iva Payne; brother Stanley Wallace; granddaughters Scarlet Sims, Misty Langston, and Alisha (Sheray) Walker; great-grandchildren Jordan (Daniel) Lightfoot, Allen Bunt, Tanner Bunt, Jaden Dollarheid, “Ducky” Walker and Gideon Ahlen; great-great granddaughters Dixie Rose Tippin and Elizabeth Tippin; and a plethora of other family, near family and friends. He was preceded in death by his parents Amanda Thompson Hendrix and Roe Hendrix; his father Fleet Wallace; a brother Burt Wallace; and sisters Dimple Taylor, Maxine Tindell, Helen Wallace. Wallace thought it was a miracle he had lived as long as he had. His driving was notoriously awful and truly terrifying, yet he could roll a vehicle through a ditch and walk away unscathed. He consistently fell off of his own roof without any broken bones. He once managed to carve a shoe nearly off his own foot with a chainsaw – without breaking the skin. His entire family was convinced he was invincible. Now he actually is. Because Wallace had the worst timing and never paid much attention to what the rest of the world was doing, he decided to leave just as social distancing became mandated, which makes a regular memorial service difficult. Therefore, the clan (his family) has decided to hold a service or wake or party (we don’t know yet) until after the coronavirus wanes and gatherings are safe.

Charles Wayne Wallace, AKA: Charlie, Daddy Rabbit, Scale Gate Charlie, Uncle Lethal, etc., the man who once convinced an entire kindergarten class a &#8220;booger monster&#8221; in his nose had bitten off his finger, decided it was time to... View Obituary & Service Information

The family of Charles Wayne Wallace created this Life Tributes page to make it easy to share your memories.

Send flowers to the Wallace family.